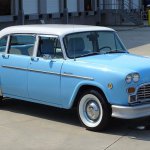 Nothing screams New York City more than a bright yellow Checker cab. In the latter half of the twentieth century, these roomy taxis plied the Big Apple’s streets, transporting New Yorkers and starring in such iconic NYC films as Taxi Driver with Robert De Niro.

We have Russian emigrant Morris Markin to thank for these durable cabs. Markin formed the Checker Cab Manufacturing Co. in 1922 in Kalamazoo, Michigan, and by the mid-1950s, his sedans were used by taxi drivers throughout major U.S cities, not just NYC.

In 1961, Checker Cab Manufacturing Co. released the Checker Marathon A12 model and marketed it as a passenger car for consumers instead of a taxi for fleet buyers.

The Pick of the Day is a 1982 Checker Marathon A12, the last production year for the civilian, non-taxi model, finished in blue with a white top – a toned-down color scheme compared with its taxicab counterparts.

According to the Atlanta dealer advertising the Checker on ClassicCars.com, this example has been a civilian model its entire life and has been with the current owner for the past 22 years.

The body, which the seller notes was repainted about 12 years ago, wears Marathon badging, quad headlights and protruding aluminum bumpers.

In 1999, a replacement Chevy 350 V8 equipped with a 4-barrel carb was installed, paired with a GM Turbo-Hydramatic 400 automatic transmission.

The interior houses blue-and-white pleated seats that were reupholstered in 2009, according to the dealer, with matching door panels and a black dash.

While not the most stylish cars, these boxy sedans were known for their durability, with some examples racking up more than 400,000 miles. The 5-digit odometer on this Checker shows a very low 13,287 miles, although the seller doesn’t mention if the mileage is correct, or whether it has turned over one or more times.