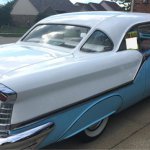 Allow a brief rant after I introduce the Pick of the Day, a gorgeous 1957 Oldsmobile Super 88 being offered for sale through an advertisement on ClassicCars.com.

My rant has nothing to do with the car, which is in Macomb, Michigan, and is being offered to its next owner for $36,500.

In the advertisement, we’re told that the car has been partially restored, its 371cid V8 and automatic transmission “have been rebuilt, including new valves and pushrods.”

In addition, “The gas tank and radiator have been removed and rebuilt. This Super 88 sports new springs, shocks, brake lines, drive shaft mounts and horn. The vacuum-powered wiper system has been upgraded to electric wipers for reliability and safety.”

The car has power steering and power brakes. Seats are covered in vinyl material.

“This beautiful 1957 Olds Super 88 has been lovingly cared for by the most recent owner for over 10 years.,” the seller informs us. “It has continued to be refurbished with original or re-manufactured parts.  It has also been restored with a tasteful replica interior and various trim parts.”

But it appears the time has come for the car to go to its next caretaker:

“The owner has fond memories of this 1957 model from his younger days.  He is hoping it will find a new home with someone who cares for it like he has.”

The car in two-tone blue and white and with a Rocket 88 engine under its hood looks great in the photos — it even has rear fender skirts that enhance its stance, as well as those ‘50s-era faux-knockoff/spinner-style wheel covers, and distinctive rear quarter windows.

So how can I rant about the car? I can’t, but I can wish the advertisement itself offered more information, and I find this much too often in ads placed by private sellers.

The specifics of the car need to be included. For example, in 1957 the Oldsmobile Super 88 was offered in various forms, and the Hagerty Price Guide notes that a Super 88 Holiday Coupe with the 371cid V8 restored to concours condition could be worth more than $65,000.

It also appears that the seller might be offered to part with the car because of advancing age. I recently had a long chat with a docent at a car museum about how much value a car’s story adds to its appeal, whether on display in a museum or in the marketplace.

I wish this and other private-owner ads told me more about the car’s story: How long has it been in its current ownership? Why is it now being offered for sale? Any wonderful personal stories about its trip from the factory to its current condition?

OK, rant done. Back to this car, which caught my eye and hopefully will draw yours as well.