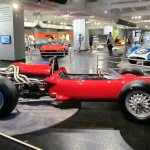 Why, we asked several months ago, is there an Avanti at the Corvette museum?  Well, we recently found out first hand when the National Corvette Museum in Bowling Green, Kentucky, was one of the stops on our 7,500-mile 75 Days of Summer road trip.

Opening in late March at the museum was, as you might expect, a Corvette-powered exhibit, appropriately titled “Corvette Powered.” Except this exhibit includes no Corvettes. Instead, it displays vehicles powered by Corvette engines, including the aforementioned 1977 Avanti II. The exhibit continues throughout this year.

“This exhibit shares a piece of Corvette history and explores the stories of unique vehicles and their use of Corvette engines,” explains Derek Moore, the museum’s curator and director of collections.

The word “vehicles” is important here since not all of them are automobiles. One is a 1997 Malibu boat that shares some design cues from the C4 Corvette as well as a Callaway Supernatural LT1 V8.

By the way, if you haven’t visited the museum for a while, you’ll find that much has changed, and more is coming.

There’s a fascinating set of mid-engine prototypes leading up to the current C8. There’s a Corvette KidZ Connection including one of the 1965 Disney Autopia-ride Corvettes and a 1959 Lusse Auto Skooter bumper car.

But not all has changed, and the museum continues to share the amazing story of the sinkhole and ensuing restoration of the Skydome and its collection, and buyers of C8 Corvettes continue to take delivery of their vehicles inside the museum.

However, changes continue: The cafe is being redone, funds are being raised for a huge addition to the museum building, and there are electric-vehicle recharging units in the museum parking lot.

Automania finally opens at the MoMA

The Museum of Modern Art in New York City has staged significant cars-as-art exhibits at various times through the years. Its latest such showcase, Automania,  was planned but was postponed by the coronavirus pandemic and finally was unveiled July 4. The exhibit is scheduled to run through January 2, 2022.

Just as the pandemic began, we quoted the museum’s news release noting the exhibition “will investigate the conflicted feelings — compulsion, fixation, desire, and rage — that developed in response to cars and car culture in the 20th century.”

We added, “The exhibition views the car as a modern industrial product, innovative means of transportation and styling icon, but also as the generator of fatalities, traffic and for its environmental impact,” and that the exhibit title comes from the dystopian 1964 Oscar-nominated animation.

As the exhibit opened this past weekend, The New York Times reported: “For many Americans, cars became a lifeline and refuge during the pandemic, even as newly sparkling air over locked-down cities highlighted their darker side. Soul-searching over commuting and climate change was balanced by hope that cars might clean up their act via electricity, and allow new generations to fall for their beauty and ingenuity.

“That wrench-tight tension is at the heart of Automania, an exhibition opening at the Museum of Modern Art in Manhattan on Sunday — July Fourth, a holiday that has come to symbolize motorized freedom and parade-queen convertibles. In that spirit, the public might be urged to visit MoMA via mass transit; but in this case, pack the kids in the SUV and have at it.”

It’s Hoods Up weekend July 10-11 at the Newport Car Museum in Rhode Island.

The Owls Head Transportation Museum in Maine hosts its All-American Show July 10 and 11 from 10 a.m. until 3 p.m. each day. Collector cars and aircraft will be on display with airplane demonstration flights and rides in vintage automobiles.

The Seal Cove Auto Museum in Maine offers a cars and coffee event July 10 from 9 a.m. until noon. Among the vehicles being displayed is the museum’s steam-powered Stanley Mountain wagon.

The Gilmore Car Museum in Hickory Corners, Michigan, plans another of its live concerts for 8 p.m. on July 10 featuring The Spazmatics, billed as the “ultimate ’80s tribute band.” Unlike other such events at the museum, this will be a “walk-in” concert with visitors asked to bring folding chairs or blankets for the event.

Mach I and Boss 302, 351 and 429 Ford Mustangs will be featured July 10 in a car show at the Mustang Owner’s Museum in Concord, North Carolina.

The Canadian Automotive Museum in Oshawa, Ontario, hosts a 90-minute downtown walking tour at 11 a.m. on July 11 with visits to sites where carriages and cars have been manufactured.

The British Motor Museum at Gaydon hosts the BMC & Leyland Show on July 11, a gathering of British Motor Corporation, British Leyland and Rover Group vehicles. Celebrated this year are the 50th anniversary of the Morris Marina, a Historic Rally Display by the Historic Marathon Rally Group and the Mini Cooper Register, and a display of emergency service vehicles.

The Canadian Automotive Museum in Oshawa, Ontario, stages its Third Thursday Zoom lecture at 7 p.m. on July 15 and will feature Sando Piszar, vice president of GM Canada, on “The Future of the GM Oshawa.”

Autobooks-Aerobooks in Burbank, California, hosts Harold Osmer and his Where They Raced: Turn 3 book from 10 a.m. until 2 p.m. on July 17.

It’s “Simply Vauxhall” on July 17 at the National Motor Museum in Beaulieu, UK, where Vauxhall vehicles will gather for a show. The following day, the museum hosts its “Simply Ford” showcase.

Barn Find Hunter Tom Cotter and his 1952 Cunningham C3 will be the featured guests July 18 at a special cars and coffee at the Seal Cove Auto Museum in Maine.

Stahl’s Auto Collection in Michigan stages its Autos for Autism event July 22 with Wayne Carini among the featured guests and with a tour of Jay Leno’s garage as a prize.

On July 23 it’s Princesses On Parade and a Fairytale Brunch at the Gilmore Car Museum in Hickory Corners, Michigan. the event runs from 9:30 a.m. until 3 p.m.

It’s “Simply Japanese” on July 25 at the National Motor Museum in Beaulieu, UK, where cars from Japanese automakers will gather for a show. Inside the museum, a very early 1935 Datsun Type 14 sedan will be on display.

The inaugural North East Motor Sports Museum rally-tour Around the Lake is scheduled for July 31. The event begins at the museum in Loudon, New Hampshire, and will take scenic roads to the Vintage Racing Stables car collection in Sanbornton. The event is limited to 1972 or earlier vehicles.

The Mustang Owner’s Museum in Concord, North Carolina, is organizing a road trip to the Woodward Dream Cruise in the northern Detroit suburbs. Cars will gather in Dayton, Ohio, on August 17, visit the Gale Halderman Museum, and then head to Dearborn, Michigan.

With so many events canceled in 2020, the British Motor Museum at Gaydon will turn the Gaydon Land Rover Show scheduled for July 31-August 1 into the 50th-plus-one anniversary for the off-road automaker. “We’re looking forward to having a belated birthday celebration,” said show manager Tom Caren.

It’s Supercar Weekend August 7-8 at the National Motor Museum at Beaulieu, England, where more than 900 of the world’s highest-performance vehicles are set for show, for demonstration runs and for “sound-off” competition.

It’s AutoFest 2021 on August 22 at the Newport Car Museum in Rhode Island, where the Mass Cruisers Auto Club (that’s Mass as in short for Massachusetts) stages a showcase featuring more than 500 vehicles.

The AACA Museum in Hershey, Pennsylvania, resumes its annual “Night at the Museum” fundraiser on October 6 with a theme of “Cars and Country Music.” Troy Engle and Southern Skies will perform at an event that also will be the kickoff to “Fall Hershey.”