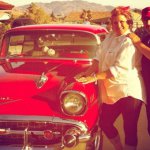 Behind this 1957 Chevy Bel Air’s beautiful exterior and shiny brightwork is a story about love, family and a woman with a spirit so bright that she uplifted all those around her.

One morning I received an email from a woman named Nancy with a note that warmed my heart. It read:

“My beautiful sister passed away on New Year’s Day from liver failure. Due to covid, she never got her transplant she so desperately needed. You ask what this has to do with classic cars? Her husband Nelson took a ’57 he bought for $625 as a work car and completely restored it for her.

“This is Peggy and Nelson Claborn, has a love story of 47 years together that not too many experience in life,” Nancy continued.

“He took this car down to the frame and by hand scrubbed it, had it powder coated, and he did all the sanding and painting…all the love and sweat and long hours he put into this car for her.”

Moved by their story, I was eager to know more about Peggy and Nelson and their journey to restore their 1957 Chevy.

I called up Nancy and Nelson via a conference call to talk with them both and when they answered, I was greeted by their warm and friendly voices.

Nelson started the story from when he and Peggy bought their 1957 Chevy after getting married, planning to use it as a daily driver for getting to and from work. At the time, it was just an “old-school beater,” as Nelson put it, and they paid around $625 or so, a fair price as the cotton was hanging out of the seats, and it didn’t have any carpeting.

Eventually, that old Chevy would meet the three boys that Peggy and Nelson had together.

“Her friends say she was the ultimate boy mom,” Nelson said. “She’d have them out front riding their bikes over jumps, and she’d film them for a half-hour or 45 minutes laughing behind the camera. They would play football in the front yard and wrestle.”

Peggy was also team mom for the kids’ baseball team that she and Nelson coached for 25 summers together.

As Nancy and Nelson continued to share fond memories of Peggy, I found myself smiling ear to ear and laughing along with them as it quickly became apparent Peggy had a hilarious sense of humor.

“She was a great person to be around. If you just met her, she would say something to get a reaction out of you and share a spontaneous laugh and a smile,” Nelson said.

He went on to tell a story of when Peggy, out at a restaurant with her grandkids, stuck French fries in her upper lip to look like fangs which made everyone bust out in laughter – she was also caught playing this joke with Cheetos at baseball games.

Peggy seemed to always have her video camera in hand filming the local high school football games, trying to get her sisters to laugh or smile by calling them a silly nickname, her granddaughters dancing or happy moments with the kids at her school where she was a teacher’s aide for children with disabilities.

“She was a really giving person. She was so unselfish it was unbelievable,” Nelson added. “I was just so blessed to have her in my life.”

The love for classic cars didn’t stop at Nelson and Peggy; all three of their sons were given classics for their first cars in high school, including a 1969 Camaro, 1968 Chevelle and a 1991 Camaro RS.

About 10 years ago, to show his love and appreciation for Peggy, Nelson wanted to give her a special gift she could enjoy and cherish. So, he set out to restore their old beat-up ‘57 Chevy.

“I tried to give her something that you can’t really buy, just my love and my work,” Nelson said. “I wanted to make it as perfect as I could. I’m not a professional body and fender guy, so it took me three years to get the body ready to paint and then buy new stuff for it.”

Along with the repaint in Corvette Torch Red, Nelson gave the Chevy a refreshed interior finished in a two-tone black and gray upholstery and did some custom work on the engine, making the car sound like a hot rod as Peggy drove it.

Nelson finished restoring the Chevy right around Peggy’s birthday, and she fell in love with it.

“She was proud of that car. When I’d come to visit, we’d get in and drive around down by the beach,” Nancy said. “It’s a really nice classic.”

“She got to drive it around, drive her grandkids around in parades with it, and she won like three different trophies at three different car shows. All of her friends were jealous of her car,” Nelson shared.

Peggy did all that she could to keep her car in pristine condition. Before it was restored, the Chevy wasn’t stored in the garage, but afterward, Peggy made sure her car was put away and covered up with a custom red cover.

Nine years ago, Peggy was diagnosed with stage four liver failure, but her diagnosis didn’t dampen her lively spirit and loving nature.

“The doctors were amazed at how she kept going and working up till like four years before she passed away. She was always smiling,” Nelson shared. “We would go to Vegas for a little getaway, and I know sometimes she would be hurting. Anytime we would go to one of the kids’ sporting events, her face would just light up once we got there, no problems at all.”

One of Nelson’s dreams was to race Peggy in her Chevy and with one of the race cars he’s restored at the Irwindale Raceway, but unfortunately, Peggy passed away before they could make the eight-mile race.

“I was gonna let her win the race the first time and give the guy in the tower a story. He always announces stuff about the history of the car when it pulls up,” Nelson said. “It’s still my goal to run it in her honor and hopefully get my son to drive it.”

In Peggy’s honor, Nelson added a beautiful gold and silver applique to her Chevy’s back window that features golden hummingbirds and lettering that reads, “Peg’s Cruising in Heaven in her Red 57.”

Nelson takes Peggy’s Chevy to the cemetery where she is interred, especially on Fridays, which was their designated date night.

Do you have a classic car with a story to share? Visit this link, fill in the information and submit your story.