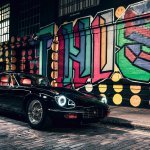 Now here’s something different, and old school as well: E-Type UK, which specializes in restoration of the Jaguar classic, is offering reimagined versions but isn’t replacing the petrol engine with an electric powerplant.

Instead, the “Unleashed” series of E-Types is being built  “to create the ultimate incarnation of Jaguar’s V12-powered icon,” the company says.

“Developing the British icon further, with a strengthened and tweaked platform, the Unleashed offering embodies a completely restored, re-engineered and reimagined example with a plethora of enhancements to the car’s drivetrain, body and interior,” E-Type UK says in its news release. Unleashed simultaneously remains true to its iconic essence whilst offering the driver thoroughly enriched and reliable on-road performance.”

The 12-cylinder engines have been bored out from 5.3 to 6.1 liters, get ceramic-coated stainless-steel exhaust and are rated at 400 horsepower. A lightweight flywheel links the engine to a new 5-speed manual transmission.

Other components, including brakes and suspension, are similarly upgraded.

Exteriors feature a custom-done wrap-around front bumper with a single-piece chrome bumper at the rear. Wheels are wire but now 16 inches in diameter. Headlamps are LED units.

The post E-Type being ‘unleashed’ by British specialist appeared first on ClassicCars.com Journal.