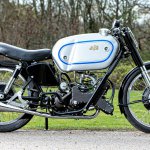 Bonhams sold a Porcupine over the weekend for nearly £300,000 ($416,000) during the Summer Stafford Sale in the UK.  No, not the prickly animal but a rare AJS 497cc E90 “Porcupine” grand prix racing motorcycle from the 1940s, which led the weekend bike auction as the highest seller.

The E90 Porcupine, so-called because of its distinctive spiked twin-cylinder-head finning, is considered a Holy Grail of historic 2-wheeled racers, Bonhams says in a news release about the auction, was the first motorcycle to win the 500cc World Championship in the series’ debut year of 1949.

The British bike was previously owned by AJS factory team rider Ted Frend, and its sale of £293,250 ($406,243) set a world’s record.  All Stafford results include auction fees.

“Just four E90s were built by the British firm, purely for its works team,” Bonhams says in the news release. “Ted Frend was the first rider to win on the Porcupine at the 1947 Hutchinson 100 race.

“The motorcycle offered was purchased in a dismantled state from the estate of the late rider in 2006 by his friend and neighbor Ken Senior, who oversaw the Porcupine’s rebuild, with the missing parts custom made.”

The Porcupine led a 90-item from all eras, from historic racers to “everyman classics,” Bonhams said, with a 98 percent sell-through rate for a total of £3,585,000 ($4,966,000). The three-day sale included bicycles, motorcycle parts and memorabilia.

Other highlights of the Bonhams sale included:

• The Ron Cody Collection of mainly Italian marques from the late sports car racer and engineer, with many examples of MV Augusta bikes and every one sold.