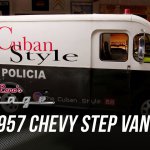 When choosing cars for his “Jay Leno’s Garage” YouTube show, Jay Leno sometimes pulls from his own collection, or gets pitched by owners and manufacturers. Sometimes, though, he stops owners on the street, which is how this 1957 Chevrolet Step Van got on the show.

The van was built by Diosely Pino, who emigrated from Cuba about five years ago, taking a Greyhound bus cross country to reach Los Angeles, where he now resides. It now serves as a work vehicle for his restoration shop. Pino gained experience working on old cars in Cuba, where 1950s American cars never died, and turned that into a business.

Before it could be put to work, the Chevy van required some restoration work of its own. Rusted bodywork was repaired and repainted with the current fake police livery in between customer jobs, Pino explained. He also added a police light and siren, and the front emblem from a 1959 Chevy Apache pickup truck. Crystal doorknobs serve as a budget replacement for the original (missing) sliding-door handles.

He kept the stock inline-6 engine and 4-speed manual transmission, adding shelves and drawers in the back to keep tools and parts (and the odd firearm) organized.

While he did put his Instagram handle (@The_Cuban_Style_88) on the side, Pino said he doesn’t want the van to serve as a rolling billboard for his shop. He’s currently a one-man operation, and already has lots of work, he explained.

Watch the video to hear the rest of Pino’s story, and to see his van cruising around the streets of L.A.