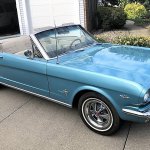 It’s my turn for the weekly roundup of favorite picks from the AutoHunter auction docket, and I’ve found a delectable selection of sporty convertibles for driving fun in the summer sun.

Wearing a gorgeous coat of Tahoe Turquoise paint, this first-gen Mustang is equipped with a 289cid V8 and automatic transmission.  The white fabric top looks to be in good condition, as does the chrome trim, including a set of GT-style fog lights set into the grille.

A special feature is the Pony Package interior, with reupholstered seats and door panels embossed with galloping mustangs. The interior also has some aftermarket additions for comfort and convenience.

“A custom-built matching center console has been added between the front seats featuring an armrest, dual cup holders, and storage compartments,” the seller says in the ad description. “Additional amenities include a push-button radio with kick panel-mounted speakers, a wood-rimmed three-spoke steering wheel and woodgrain applique on the dash face.”

Another familiar mid-60s classic, this bright-red VW cutey has been “refinished inside and out,” according to the seller, including rebuilds of its 1.2-liter, 40-horsepower flat-4 engine and 4-speed transaxle.  The car has been repainted, and a new top was installed.

The interior was reupholstered in two-tone black and tan cloth low-back bucket seats, with matching door panels and black carpeting.  The steering wheel has the Wolfsburg castle crest at its center, and an AM/FM/CD stereo system has been installed, hidden away in the glove box.

This looks to be a gleaming and enjoyable example of Volkswagen’s sporty Type 3 variant.

At the other end of the performance equation is this Corvette powered by a booming 427cid V8 with output around 500 horsepower, according to the seller, linked to a 4-speed manual transmission and 12-bolt Positraction rear.  The big block is a replacement engine, the seller notes, although the transmission and rear are believed to be original.

This was the first year of the C3 generation, and it has all the hallmarks of the Mako Shark concept-car transition. The sleek fiberglass body has been repainted in Rally Red and sits on a powered-coated chassis.  The sports car is equipped with factory power steering and brakes along with air conditioning, which the seller says needs repair.

The Corvette has a white cloth top installed, and a color-matched removable hardtop is included with the sale.

The stunning Austin Healey was the recipient of a two-year, frame-off restoration “and was refinished both inside and out, featuring a custom Cream Metallic Gold exterior and a replacement black cloth retractable top,” the seller says in the ad.

The British sports car has its numbers-matching 2.9-liter inline-6 engine, fed by a pair of SU carburetors and rated at 150 horsepower, and linked with a 4-speed manual transmission.  These cars usually came with electric overdrive, although the ad does not say as such.

The red-vinyl 2+2 interior looks splendid, and the Healey rides on a set of chrome wire wheels.

Here’s yet another sparkling red ragtop, this one a notable classic of the ‘50s and the first year of Ford’s iconic Tri-5 T’bird two-seaters. These classy roadsters were more boulevard cruisers than outright sports cars, with soft rides and most often with automatic transmissions, but they did what they did while looking totally cool, then and now.

With just 55,000 original miles, this Thunderbird has had an apparent repaint in Torch Red with a white top and white-and-red interior.  Power comes from the original 292cid Y-block V8 with a 4-barrel carburetor and Ford-O-Matic automatic transmission, which the seller notes has “a small fluid leak.”

The interior looks to be in great condition, and the car has an updated 12-volt electrical system from 6 volts, a conversion that is not nearly as simple as it might sound.

As an added attraction, the Thunderbird stands on what look like Kelsey-Hayes wire wheels, or reasonable facsimiles.

A historic side note: the ’76 Eldorado convertible came at a time when most folks believed open-top cars were at the end of their line because of federal safety regulations.  Thusly, this final-year Cadillac model was considered possibly the last of its kind.  Many people bought them and put them away as landmark collectibles.

Obviously, reports of the death of the convertible were greatly exaggerated, to paraphrase Mark Twain. But the mighty Eldo still reigns as an icon, among the biggest and most opulent drop tops of its day.

This Eldorado presents as a time capsule, with just 43,000 miles on its odometer and an 8-track stereo in its dashboard.   Red with a white top and white leather seats, the Eldorado is apparently in all-original preserved condition.

The plus-size luxury craft is powered by a 500cid V8 fed through a 3-speed automatic and then-unusual front-wheel drive.  That might sound like a lot of performance gusto, but the enormous big block was rated at just 190 emissions-choked horsepower.

Not the last convertible, but a real timepiece land yacht and a certain head turner everywhere it cruises.