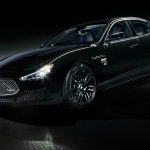 Hiroshi Fujiwara is considered the godfather of Japanese street culture and has formed a partnership with Maserati to create Ghibli Operanera and Ghibli Operabianca, which Maserati says, “crosses geographical and disciplinary borders into the unexplored territories of audacity, in a realm beyond which music is embodied in the form of a car and rule-breaking is allowed.”

The result, presented recently in Tokyo, is “artwork in the form of a melodic duet, Operanera and Operabianca, two contrasting evocations of a Special Edition of Maserati Ghibli.

“The partnership is (the) fruit of the capabilities of the Maserati Fuoriserie customization program, which permits customers to create their own Maserati, tailored to their unique tastes,” according to the Italian automaker.

“The car is more than a simple object; it becomes a tailor-made garment, to be proudly worn on the road and along the streets of the world as an extension of oneself, and a symbol of contemporary luxury.”

Maserati calls Fujiwara “a revered trendsetter, a maverick. Pioneer of the streetwear culture of Tokyo in the 1980s, he was one of the first DJs to import hip hop into the Land of the Rising Sun, and as a producer and musician he has worked with international recording stars.

“As a visual artist he specializes in expressing aspects of the urban experience moods. Like Maserati, he has the ability to break down barriers and be audacious. In the spirit of the concept of “ITANJI,” a Japanese term signifying the coming together of Italian design and Japanese perfection, Operabianca and Operanera were born.

“Today, the encounter between the visual codes of Maserati and the street style of Hiroshi’s brand, Fragment, gives birth to a creative partnership which is a duet in the truest sense of the term: Maserati meets Fragment.”

175 Ghibli cars will be built for global distribution, a set in black and another in white. However, Maserati adds, “The uniformity of color applies not only to the exteriors but also to the body-color wheels and handles. The interiors, on the other hand, are in premium leather and Alcantara, with contrasting silver inserts for the vertical stitching and the Trident on the headrests. The seat belts are dark blue.”

In addition, the code M157110519FRG appears underneath the cars’ three side air ducts. The alphanumeric tag “seals the partnership: the first four characters are the Ghibli ID code, the next six numbers record the date of the first meeting (5 November 2019) between Hiroshi and the Centro Stile Maserati, and the final three letters are the acronym of Fragment.”