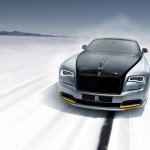 Rolls-Royce has launched its latest collection series of Wraith and Dawn Black Badge vehicles as the Landspeed Collection celebrating records set by George Eyston in Thunderbolt, a Bonneville-style vehicle powered by a pair of Rolls-Royce R V12 aero engines.

Among the cars’ interior features are what Rolls-Royce terms “fissured texture” designed to mimic the Salt Flats’ surface and with a steering-wheel detail that repeats the dark track-line that racers use on the Bonneville Salt Flats.

The “Starlight” headliner is designed to show the precise night sky on September 16, 1938, when Eyston set his third and final land-speed record of 357.497 mph.

Silhouettes of the Thunderbolt and its record-setting speeds are laser-engraved on the center console. The interior of the driver’s door has ribbon colors representing honors Eyston received during his lifetime.

“It’s human nature to want to go further, do more, be greater than ourselves,” Rolls-Royce Motor Cars chief executive Torsten Muller-Otvos, is quoted in the company’s news release. “The innate desire to extend horizons and define new limits is an instinct we’ve always understood at Rolls-Royce; and we have acted upon it once again with our new Landspeed Collection.

“The Collection, which includes both Wraith and Dawn Black Badge, celebrates someone with exactly that dauntless, fearless, pioneering spirit. His name was Captain George Eyston, a Cambridge University graduate, racing driver, gifted inventor and engineering genius. In the late 1930s, he broke the world land-speed record three times with his car Thunderbolt, powered by two Rolls-Royce R V12 aero engines. He was a true hero from an age of epic endeavours; yet both he and Thunderbolt have been all-but forgotten for more than 80 years.

“With this Collection, we have revived Eyston’s memory and retold his remarkable story. Throughout Wraith and Dawn Landspeed, clients will find numerous subtle design elements and narrative details that recall and commemorate his amazing achievements, grand vision and exceptional courage.”

Eyston was born in 1897, started racing motorcycles under an assumed name while in school, studied engineering at Trinity College, Cambridge, and served with distinction in World War I. He returned from the war to develop and drive race cars and earned patents as the inventor in the field of supercharging.

His records at Bonneville included those for 24- and 48-hour endurance runs on a 10-mile circular track in 1935, and he returned in 1937 with Thunderbolt to set a trio of land-speed records.

The supercharged, 37-liter V12 engines that propelled the car each produced more than 2,000 horsepower and previously were used in the Supermarine S6.B seaplane that was used in development of the engines for Spitfire aircraft.

While those engines are preserved at the Royal Air Force Museum and the Science Museum in London, Thunderbolt was destroyed in a fire in 1946 while in storage.

While those engines are preserved at the Royal Air Force Museum and the Science Museum in London, Thunderbolt was destroyed in a fire in 1946 while in storage.