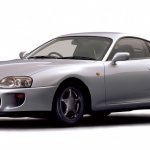 Toyota is making more replacement parts for the A70 and A80 Supra sports cars.

The automaker announced plans for replacement parts in May 2019, and launched the first batch of parts in 2020. Now Toyota is adding a few more items, which will be available in North America, Japan, and Europe beginning in July 2021.

Parts available for the A70 Supra at that time will include a clutch master cylinder, clutch release cylinder, brake hose, heater hose, and air conditioner control-panel knob, according to a Toyota press release. In August 2021, Toyota will add a front emblem (previously announced in 2020) to the catalog, followed by side-protection moldings, a rear emblem, front-door garnish, and front suspension lower-arm bushing.

Just two new parts are being added for the A80 Supra. An oxygen sensor will be available in July 2021, followed by a front bumper cover, which will arrive in August or later, according to Toyota.

Parts will be available for purchase at Toyota dealerships, just like parts for newer vehicles. However, production runs will be limited, so parts will only be available while supplies last, Toyota noted. Full details will be posted on the Gazoo Racing website July 1. Gazoo Racing is the Toyota performance division responsible for the replacement-parts program, as well as for developing the fifth-generation A90 Supra.

The A70 and A80 were the third and fourth generation of the Supra, respectively. The A80 has achieved immortality thanks to the “Fast and Furious” franchise, with a car used in 2001’s “The Fast and the Furious” recently selling for $560,000 at auction.

The post Toyota announces more replacement parts for A70 and A80 Supras appeared first on ClassicCars.com Journal.