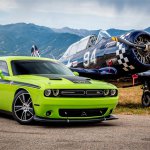 Up for auction on AutoHunter is a 2015 Dodge Challenger R/T Hurst Elite Series performance coupe that’s been featured on TV and autographed by the cast of Bitchin’ Rides on the Velocity Channel.

“After a hiatus since 1983, the third-generation Challenger launched in 2008 and saw a facelift beginning in 2015 that incorporated a new grille, quad ‘halo ring’ headlights, LED taillights, and a functional hood intake,” the online auction states in the coupe’s listing.

This Hemi-powered example is finished in Sublime Green with black-painted R/T striping and features a Mr. Norm’s G22 speedway splitter up front and a rear trunk lid spoiler.

“Handling for this Challenger is assisted by a sport suspension, Hurst-specific lowering springs, and performance brakes.”

Power comes from a 5.7-liter Hemi V8 factory-rated at 375 horsepower and connected to a TorqueFlite 8-speed automatic transmission.

The odometer reads 44,555 miles, which are original to the car, the seller says.

Visit this vehicle’s AutoHunter auction for more information and gallery of photos.