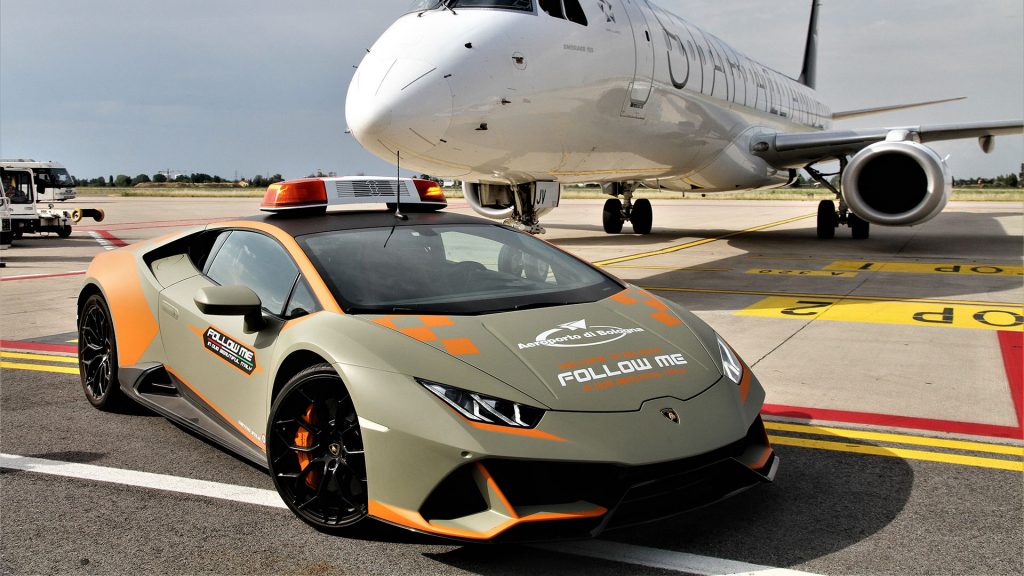 It has become somewhat of a tradition for Lamborghini to have an impressive follow-car on the tarmac of the Aeroporto di Bologna, officially known as the Bologna Guglielmo Marconi Airport, that started back in 2013 for the 50th Anniversary celebrations in and around Sant’Agata Bologna. The first Lamborghini follow-me car was a bright white Aventador LP700-4 with red checkered flag livery, used from May 6. until Sunday, May 19. 2013 to guide airplanes to their gate. For the occasion, the car was driven by people from the Aeroporto di Bologna who had been instructed on how to drive this 700 hp V12 Bull by none other than Mario Fasanetto … test driver for Automobili Lamborghini SpA. In late 2016 there was another Lamborghini follow-me car driving over the tarmac at the Aeroporto di Bologna, this time a yellow Huracan LP610-4 with a black checkered flag design created by the Centro Stile, on the sides was the skyline of Bologna and the text ‘Welcome to Bologna’. An orange lightbar was installed on the roof next to a large aerial while the black and white leather interior was fitted with additional controls for the various signs that were added to the car to turn her into an official ‘Follow me’ car on the landing and takeoff strips, by January 2017 this one would return to the factory. 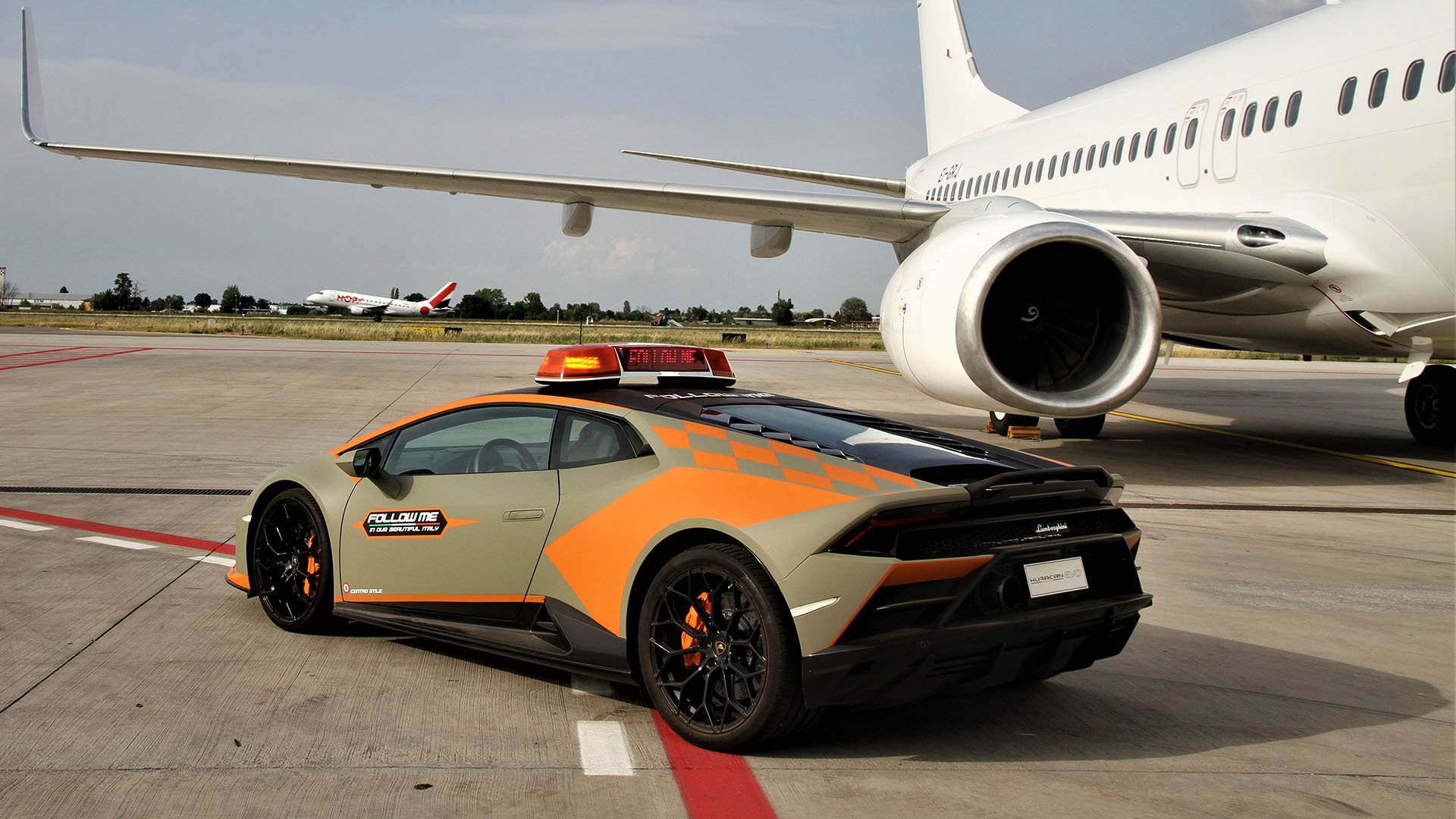 And now we discover the 7th Lamborghini follow-me car already for the Bologna airport, this time another Huracán, but in the latest EVO version, not the EVO RWD, but the all-wheel-drive EVO, finished in an amazing Matt Verde Turbine shade with matt Arancione checkered design on the front fenders and a touch of Arancione on the rear fenders, naturally the obligatory orange lightbar on the roof is mounted. 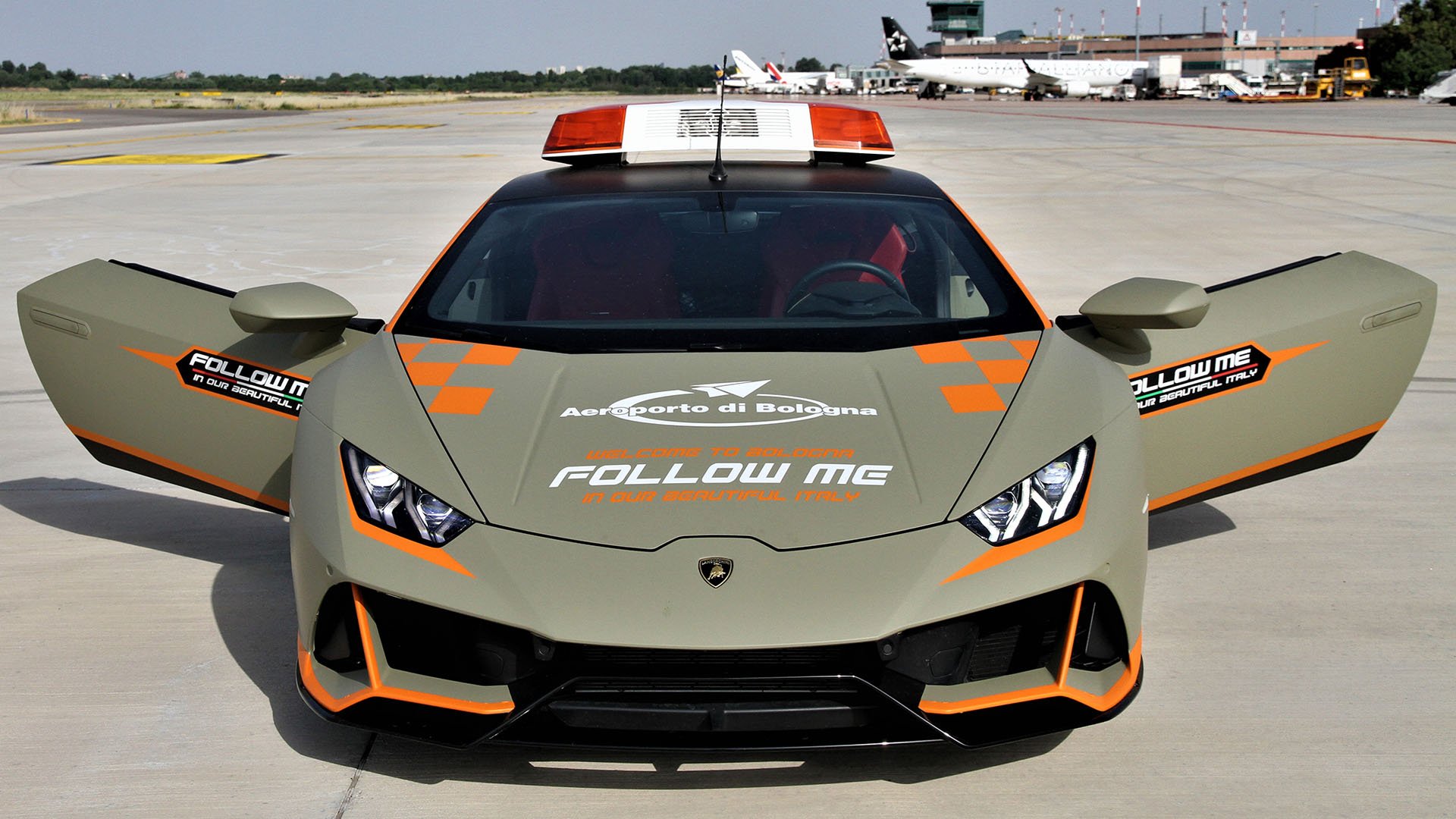 On the side, we find an amazing-looking ‘Follow Me’ script, with the caption ‘in Our Beautiful Country’ complemented by the Italian Tricolore, a communications system has been fitted to keep in constant touch with the airport control tower, and if you look closely at the bottom of the doors, you’ll notice a small tricolor cockade next to the Centro Stile script, which we’ve seen before on the limited edition Huracán Avio a few years ago, which aside from the Blu Grifo we all know, was also available in this same Verde Turbine shade. 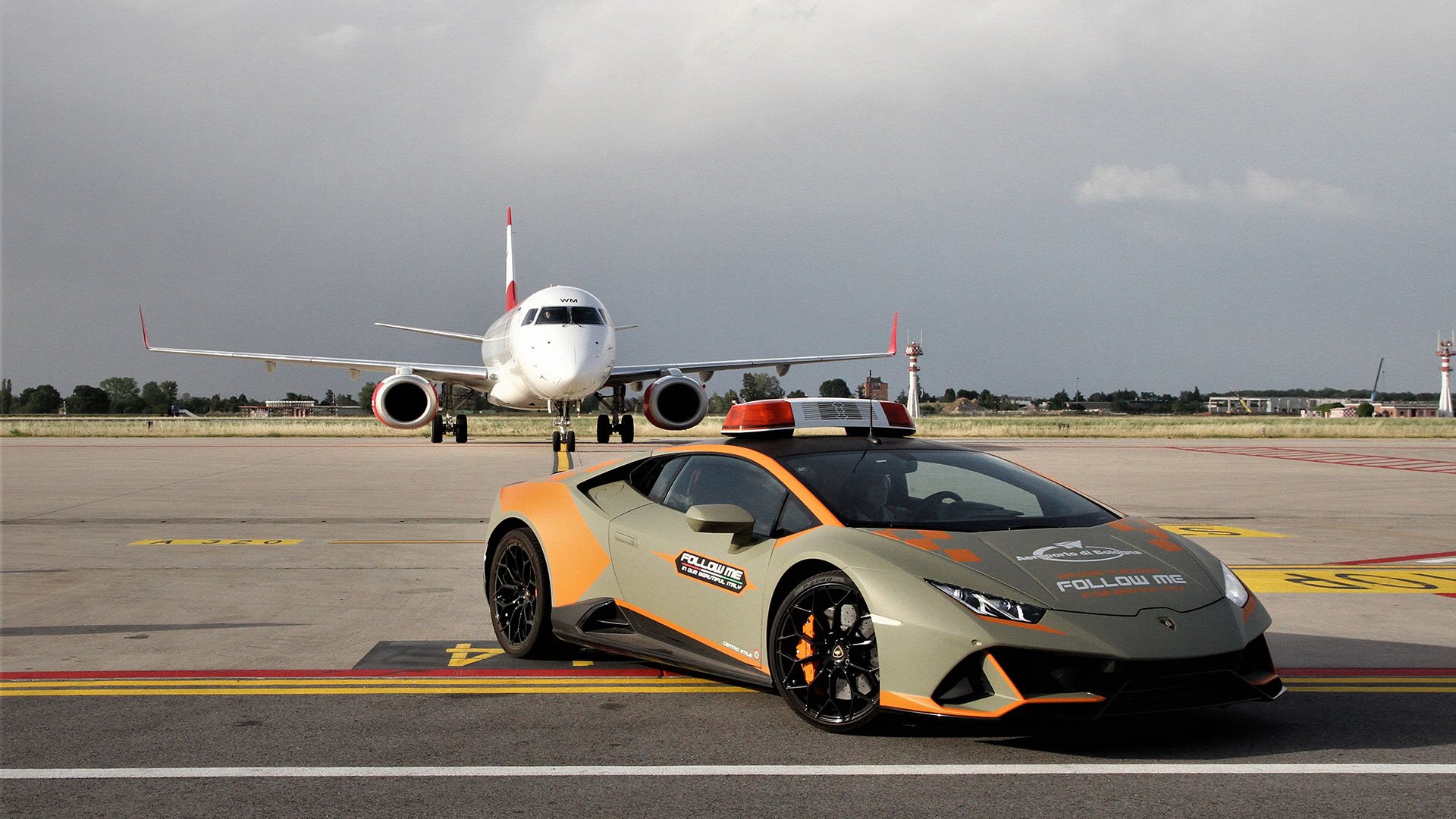 There is no indication if this is again a limited-time-only appearance or a more permanent one, but my guess is this seventh iteration of Lamborghini’s follow-me car for the Bologna Airport will be used during the Summer holiday months and be returned to the factory in September 2021 …

Enjoy some more photographs of this special Lamborghini Huracán EVO: 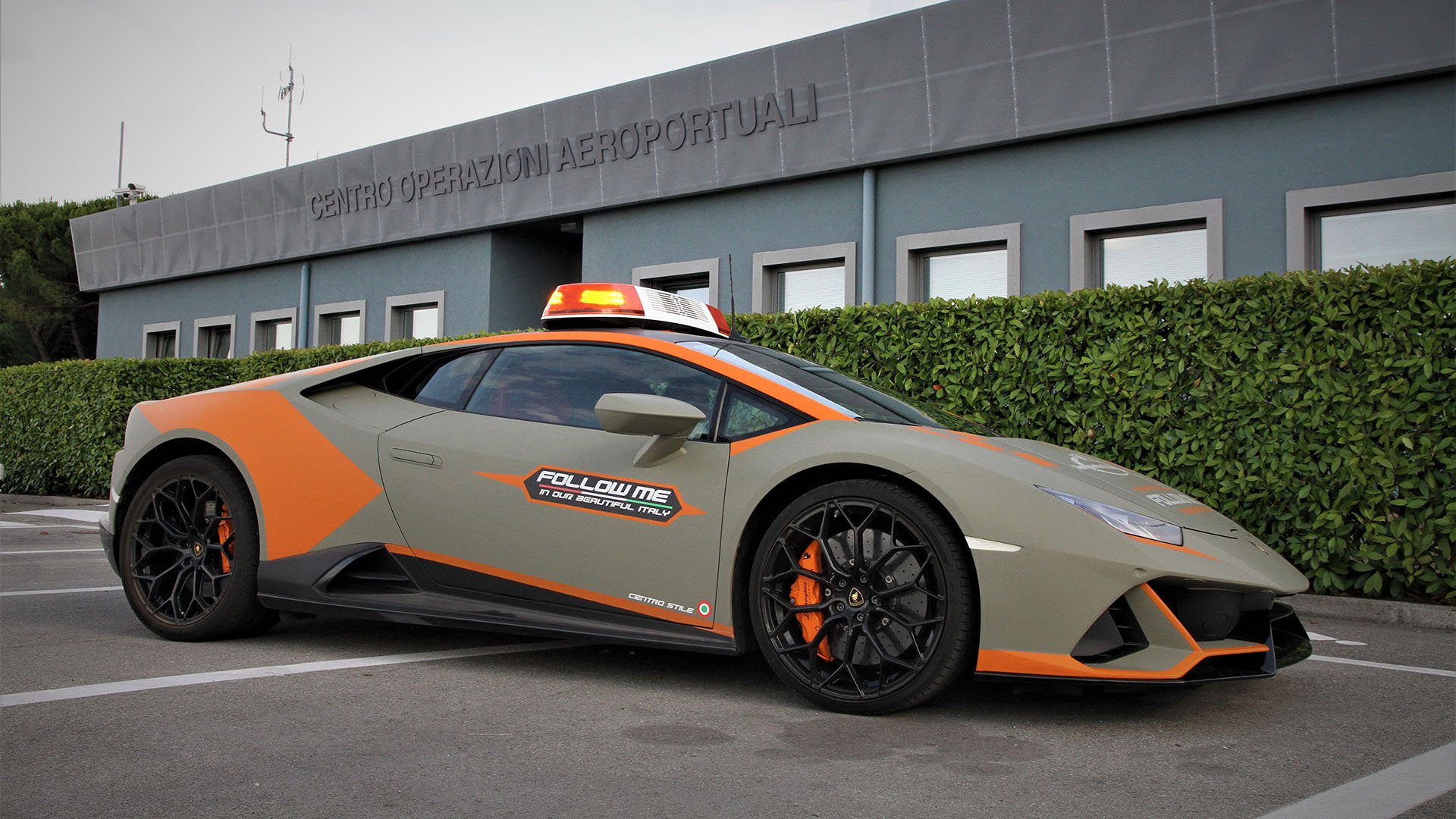 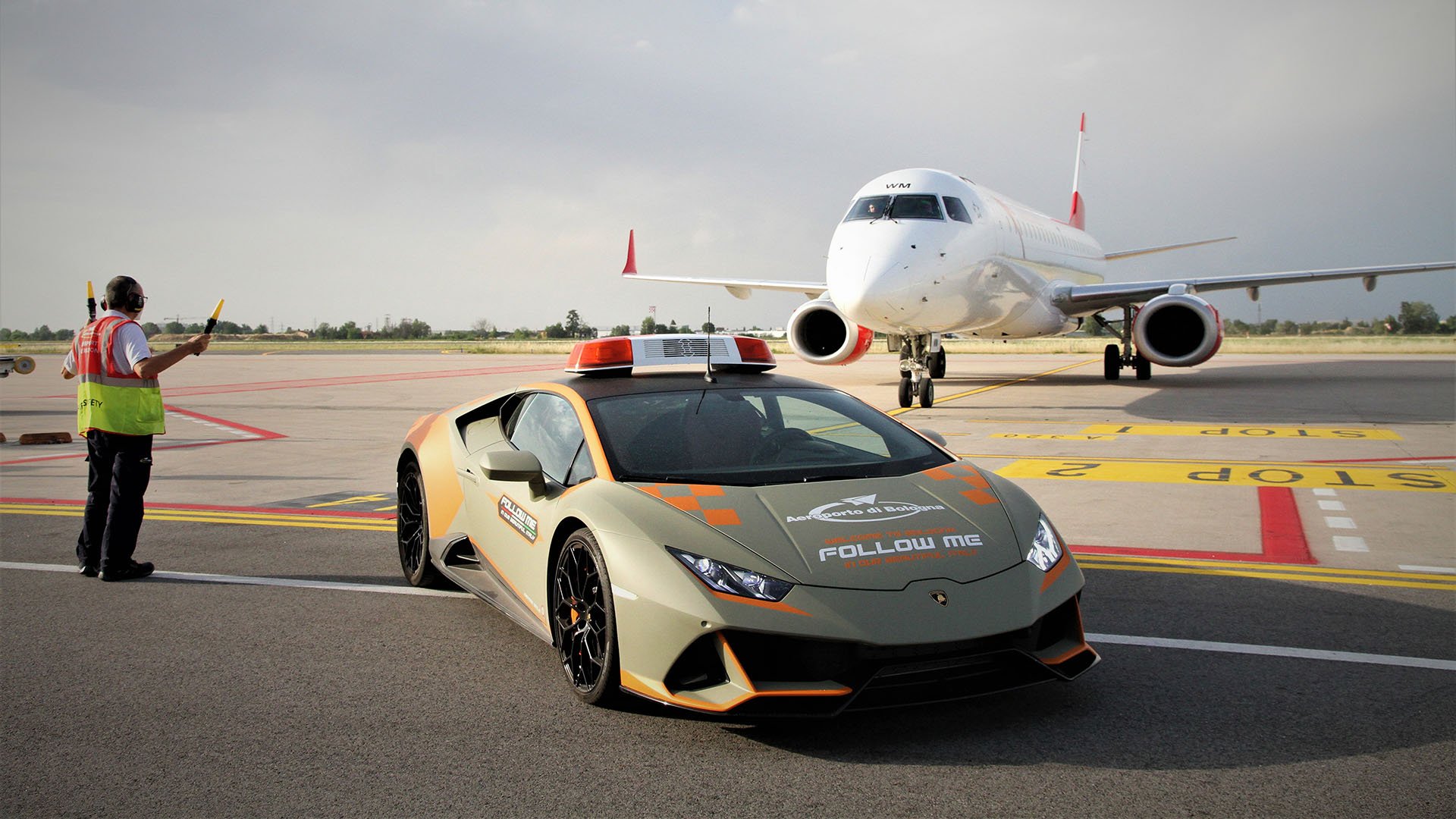 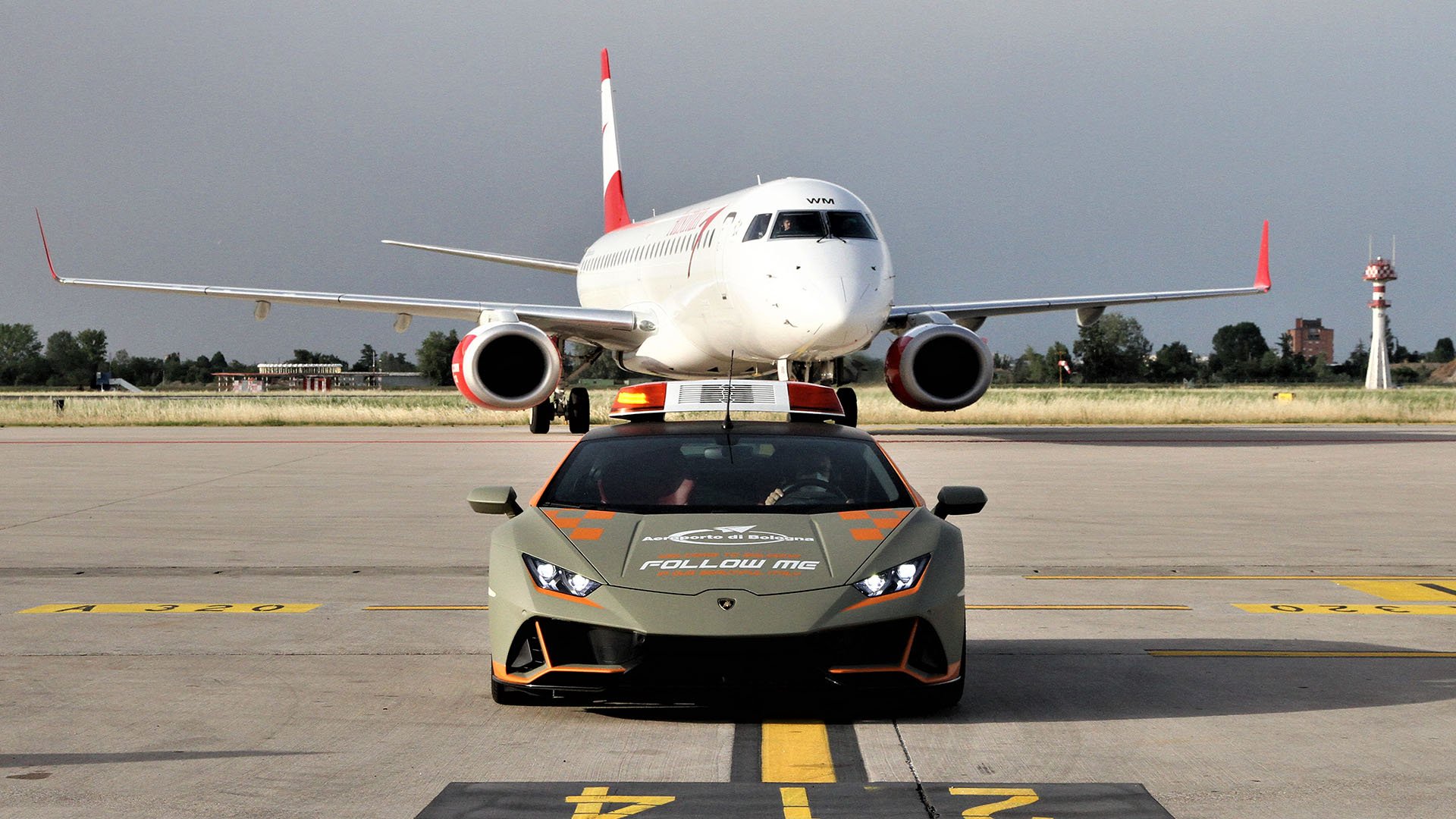 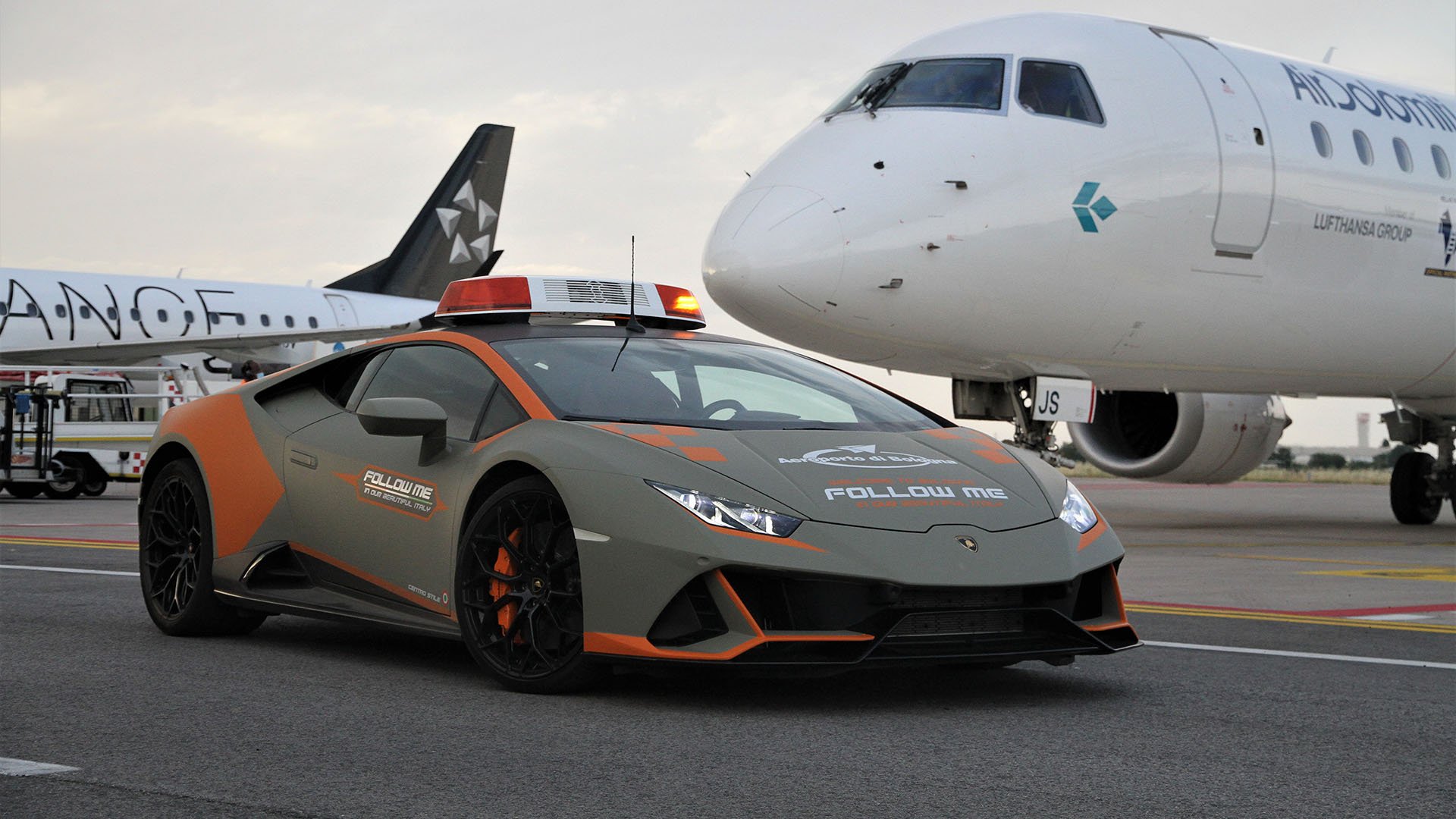