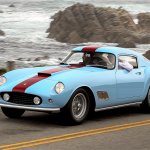 A pair of legendary Le Mans race cars from the 1980s and one the greatest Ferrari sports racers of the 1950s are among the latest high-end consignments added to RM Sotheby’s flagship Monterey, California, auction.

They join the iconic 1970 Porsche 917K that was previously announced, as well as spectacular sports and GT cars, pre-war classics and modern exotics – many of them carrying 7-figure pre-auction estimates – that will cross the block at the August 14-13 auction, held during annual Monterey Car Week, which culminates in the Pebble Beach concours d’Elegance.

The Porsche 956 (estimated value $4.5 million to $6 million) was one of nine prepped by the Porsche factory for privateer racing and was driven by such illustrious pros as David Hobbs, Derek Warwick, Dieter Quester and John Fitzpatrick.  It scored many podium finishes and won at Brands Hatch outright.

The Ferrari 512 BB/LM, chassis no. 35527, was raced by the N.A.R.T. team in the 1981 Le Mans 24, driven by John Morton, Alain Cudini, and Philippe Gurdjian. It ran third overall, and at the fastest pace achieved by any BB/LM at the circuit, before retirings. Estimated value: $3 million to $3.5 million.

A shapely 1958 Ferrari 250 GT LWB Berlinetta “Tour de France” by Scaglietti, chassis no. 1031 GT, also has been added to the docket, A two-time competitor in the Tour de France, the Ferrari achieved fourth overall in that event in 1958 and was sixth at the Monza Lottery in 1959, driven by privateer racer Jacques Péron. Estimated value: $5.75 million to $6.5 million.

Getting off the track and on to road cars, the auction will offer a 1963 Ferrari 250 GT/L Berlinetta Lusso by Scaglietti, which won the coveted Ferrari Cup in 2011 and 2014 at the Carmel-by-the-Sea Concours in Carmel, California, and was awarded First-in-Class at the Concorso Italiano in Seaside, California. Estimated value: $1.5 million to $1.75 million.

Another impressive street machine going to auction is a 1971 Lamborghini Miura P400 S by Bertone that is presented in gleaming unfinished sheet metal to show off its original panels and allowing the buyer to either choose its next paint color or leave it the way it is as a unique example. A late matching-numbers Series II Miura S, the car has been driven fewer than 16,000 miles.

“Chassis no. 4761 is a sensational time-capsule type-discovery, taken off the road in 1974 and hidden in a Northern California Bay Area warehouse for the next 45 years,” the auction company says. Completely refurbished, the Miura has an estimated value of $1.8 million to $2.2 million.

Among the grand classics is a 1935 Duesenberg Model J “Sweep Panel” Dual-Cowl Phaeton by LaGrande, with elegant coachwork Gordon Buehrig. Fully restored “to the highest standard,” the Duesenberg has been shown at the Pebble Beach Concours d’Elegance. Estimated value: $3 million to $4 million.

A 1930 Cadillac V-16 Convertible Sedan by Murphy that is “packed with many special features including a disappearing windshield for rear passengers and exotic inlaid interior woodwork” will be auctioned. Built specifically for the son of noted GM dealer and horse racing legend Charles Howard, the Cadillac has received numerous Best-in-Class victories, including at the Pebble Beach Concours. Estimated value:  $1.5 million to $1.8 million.

A pre-war classic from Italy also will be at the Monterey auction, a 1937 Bugatti Type 57 Cabriolet, fully restored and a multiple award winner, including Best of Show Pre-War in 2013 at the La Jolla Concours d’Elegance. Estimated value: $650,000 to $800,000.

Also offered at the RM Sotheby’s auction will be the Larry Fox Collection of late-model supercars, all offered at no reserve, including a 2008 Bugatti Veyron 16.4 and a 2015 Ferrari La Ferrari, each with fewer than a thousand miles on their odometers.  Other 7-figure cars in the collection are a 2003 Ferrari Enzo and a 2015 Porsche 918 “Weissach” Spyder.

For more information about the Monterey auction, visit the RM Sotheby’s website.