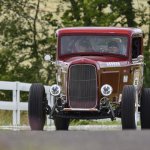 The sisters, competing for the fourth time, earned $50,000 for their performance in a 1932 Ford 5-window coupe. Olivia drove and Genna navigated. They had finished seventh overall in 2019.

The competition drew 120 entries in the time-distance rally that precludes the use of modern navigation or electronic devices while competing in various stages at precise time and speed averages. Teams can use only a map, stopwatches and “old-fashioned reckoning,” event organizers note.

“We are thrilled that the Gentry sisters won the race after several impressive showings over the past few years,” Wade Kawasaki, president and chief executive of event owner Legendary Companies, was quoted in the post-event news release.

“These young ladies and their beautiful ‘32 Ford have shown that the spirit of competition, a drive to compete and excellent math and navigational skills live on in the youngest generation.”

The Gentrys’ No. 65 ’32 Ford coupe is powered by an original-style 21-stud flathead V8 engine with a 3-speed transmission.

Finishing second were Jody Knowles and Beth Gentry in a 1932 Ford cabriolet. Third went to Gary and JeanAnn Martin in a 1932 Ford coupe. Fourth was a 1916 Hudson Hill Climber with Howard and Doug Sharp aboard.

The post Sisters, ages 20 and 18, youngest winners of The Great Race appeared first on ClassicCars.com Journal.