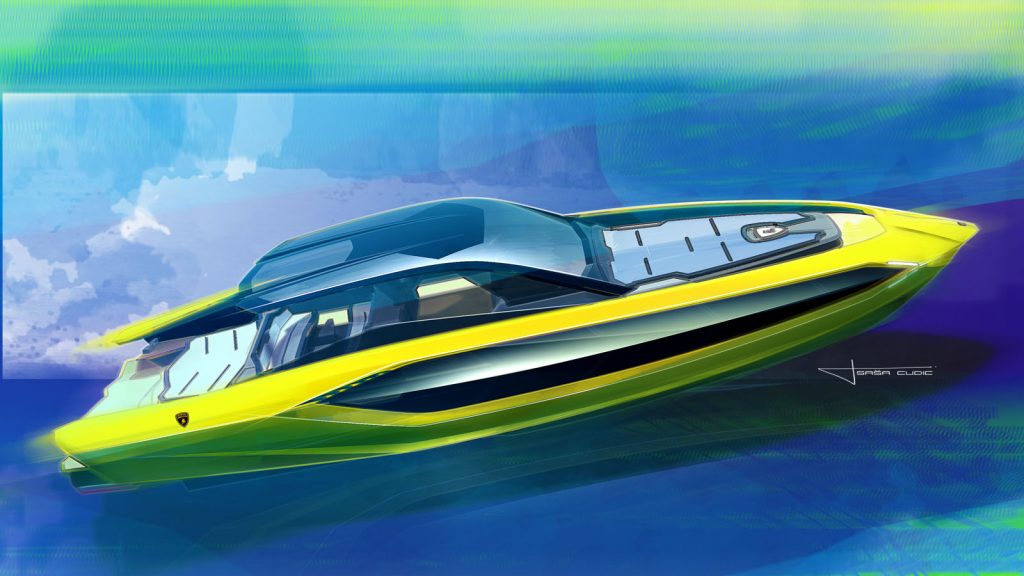 We’ve already published the news about a 63-foot high-speed yacht from Tecnomar with some serious Lamborghini influence back in June 2020, about a year ago, called the ‘Tecnomar for Lamborghini 63‘, with a total power output of 4,000 from two V12 MAN engines that give this 24 tons yacht to a top speed of 60 knots (that’s 111 Km/h), with styling inspired by the Lamborghini Sián. The 63-foot length (19.2 meters metric) is based on the fact Automobili Lamborghini SpA was founded back in 1963, this new model from Tecnomar, a company within The Italian Sea Group with their headquarter in Marina di Carrara will be a limited edition and is currently the fastest yacht in their lineup. It has taken Tecnomar about one year to complete their first hull and launch it into the water at the Marina di Carrara, one of the Italian Sea Groups shipyards, and this first production model comes finished in a bright, gold look, high gloss hull, very impressive on the water with the sun’s reflection, but let’s remember this isn’t the first Lamborghini boat in existence, Ferruccio’s bespoke built Riva Aquarama from 1968 was the first Lamborghini related boat, he managed to convince Riva to build him hull number 278 with a pair of V12 Lamborghini engines instead of the usual V8 units. 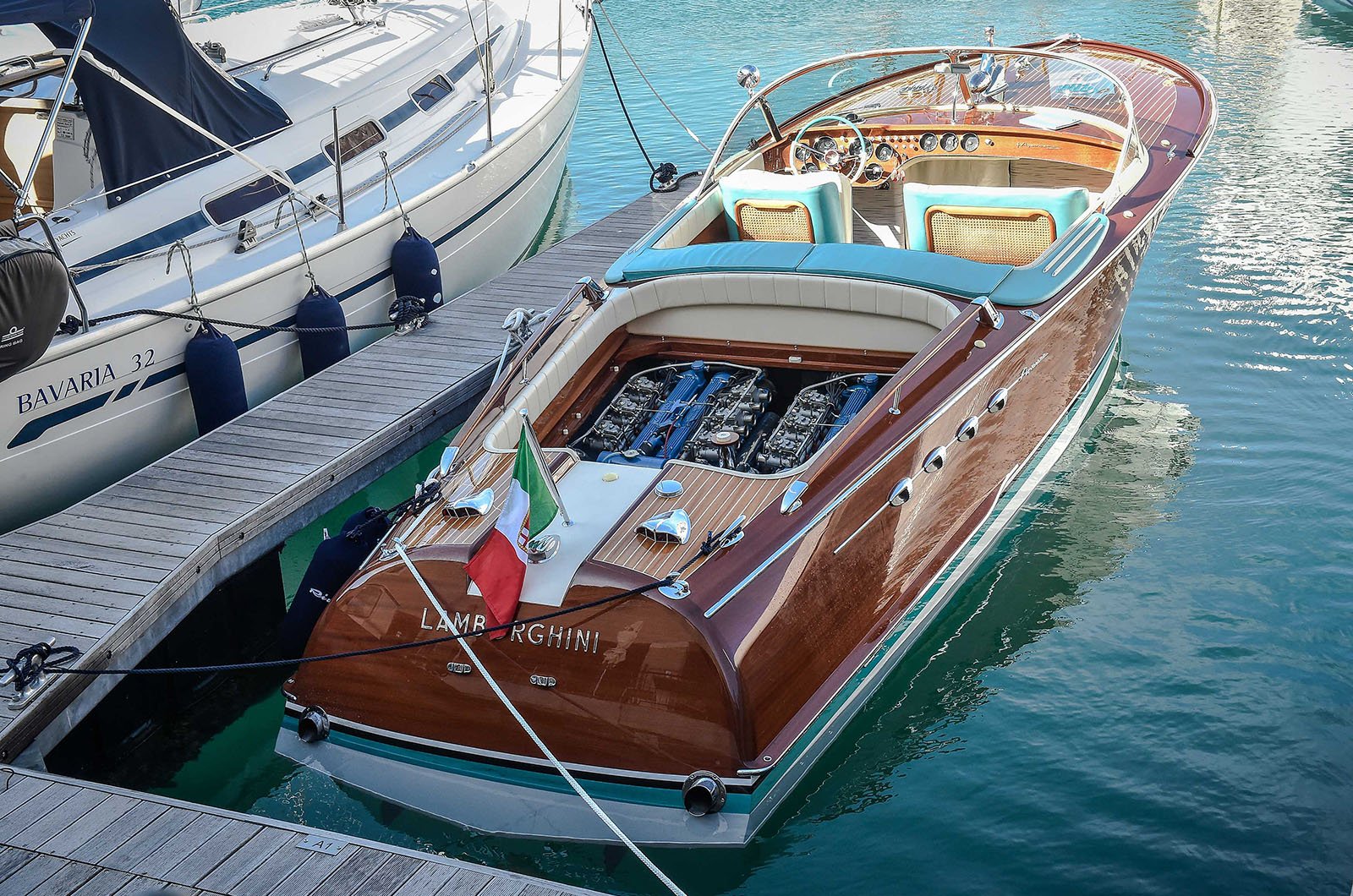 And things got even more interesting in the late Eighties and Nineties, when we could admire the Class 1 World Powerboat Championships, a series in which several of the World Champions used V12 Lamborghini marine engines, there is even a rumor you could order the LM002 off-roader with such a marine engine back in those days, but while that Riva and those Class 1 offshore powerboats came with Lamborghini sourced V12 engines, this new Tecnomar for Lamborghini fits MAN engines, still V12 units, but Lamborghini no longer builds marine engines, so in this case the connection is purely cosmetic, the styling for both the hull and the interior is heavily influenced by modern Lamborghini cars. 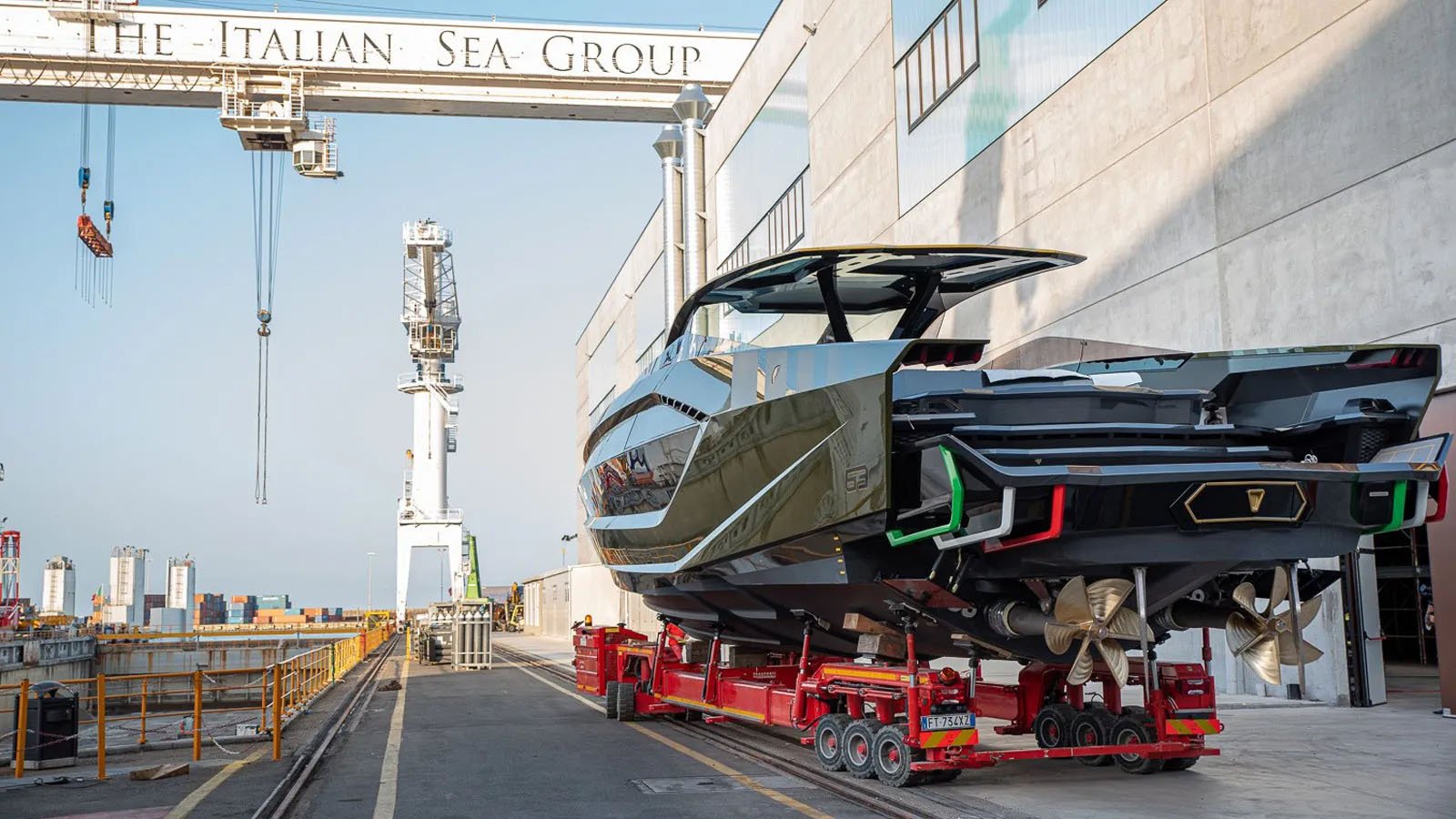 The official press release from Automobili Lamborghini SpA back in June 2020 mentioned: ‘This motor yacht project, developed by The Italian Sea Group, started with several collaborative sessions with the contribution of Lamborghini’s Centro Stile and inspiration from the Lamborghini Sián FKP 37: the hybrid super sports car incorporating benchmarking new supercapacitor and materials science technologies, that anticipates the future with an unmistakable design and completely customizable color and details.’ 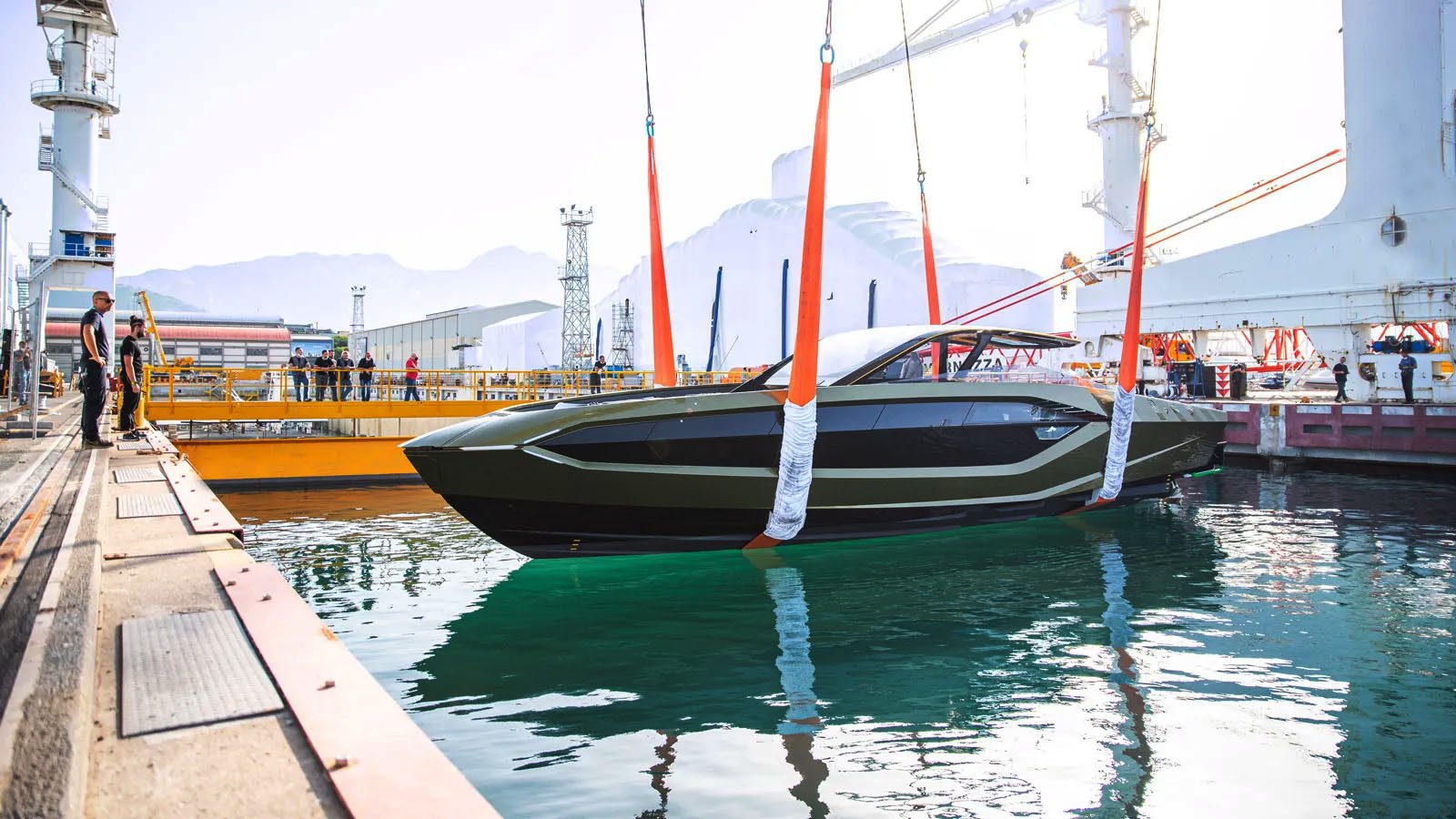 The first completed hull for the Tecnomar for Lamborghini 63 is finished in gold, but just as with a Lamborghini car, there is nearly no limit when it comes to shades the client for this yacht can select from, would you prefer Arancio Argos on your 63-footer … no problem at all, or perhaps bright green or yellow, it’s all possible thanks to the fact that each Tecnomar is a bespoke build, the basic design and style remains the same for each production hull, but just about everything else is customizable. 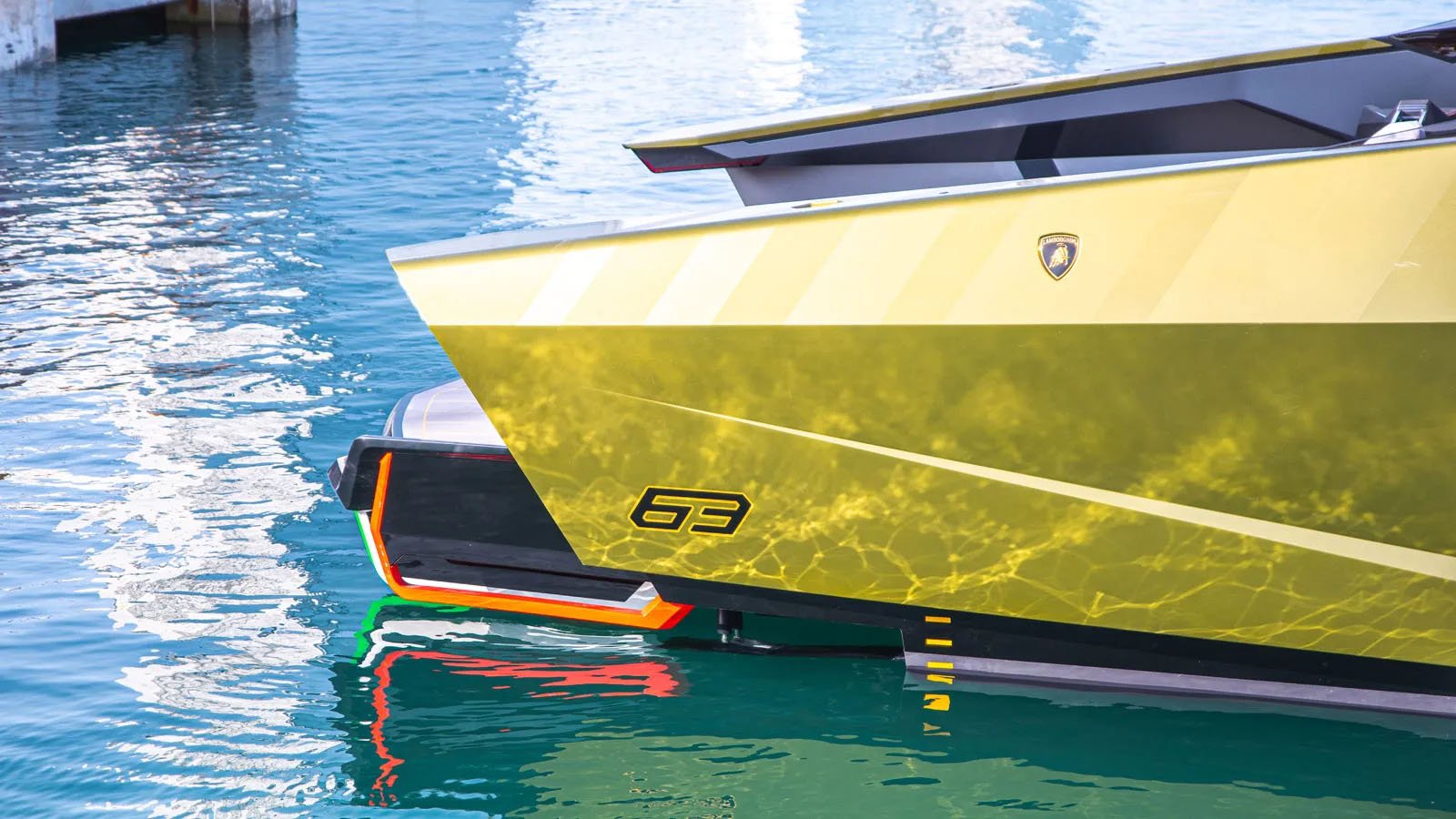 Hull #1 also comes with a nice ’63’ script on the sides, in the same typeface we can admire on some of the Lamborghini Sián that have been delivered already, and at the aft, on what we might call the swimming platform, you’ll notice the ‘fins’ are finished in green, white, and red … or the Italian Tricolore. Also, take a closer look at the rear, doesn’t that hexagon in the center remind you of something? I sure see the same shape as used on the exhaust surround for the initial Lamborghini Aventador release, the LP700-4 model. 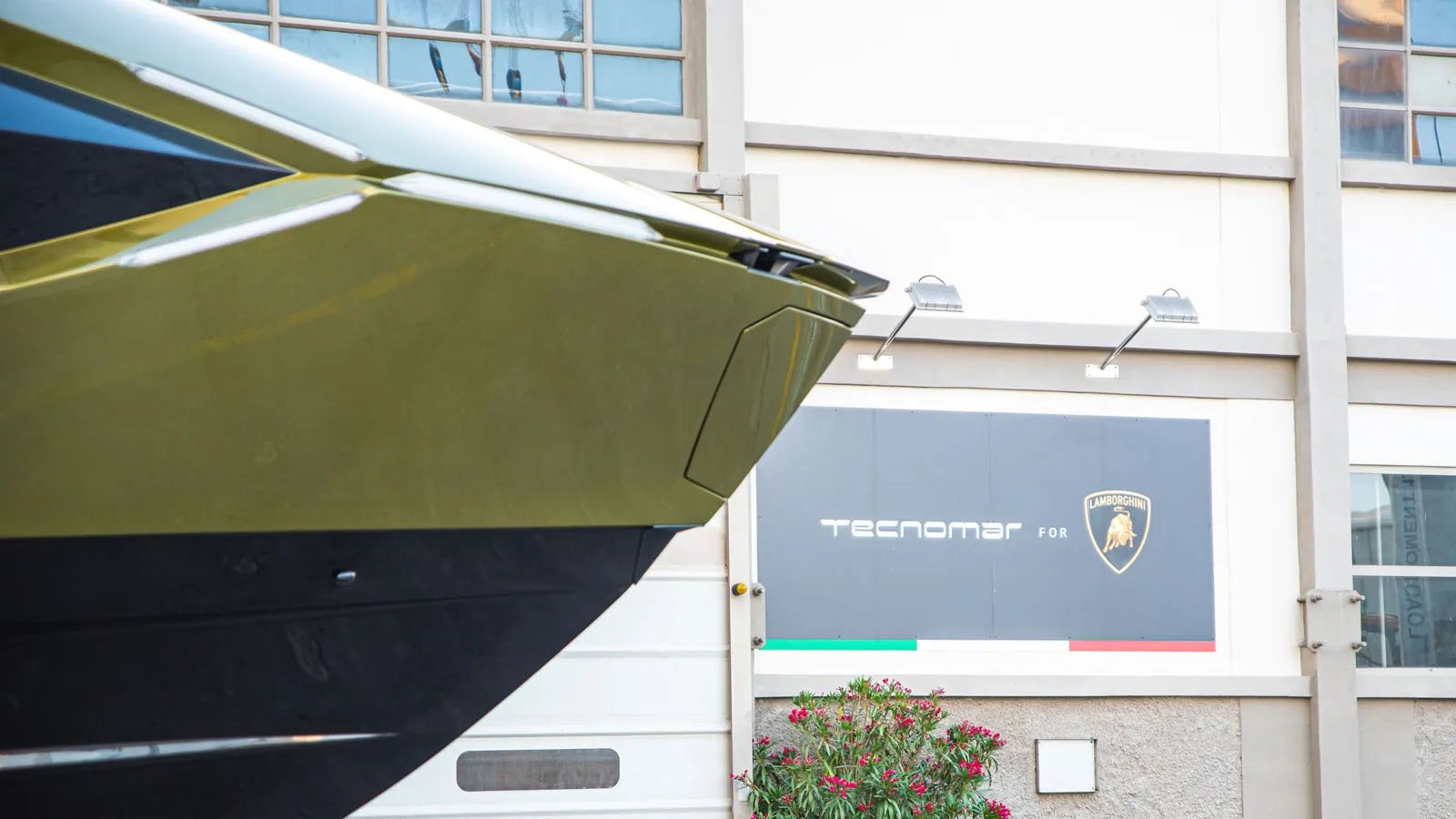 If you check out the front of the Tecnomar for Lamborghini 63 you’ll clearly see the large Y-shaped running lights integrated into the angular design, initially seen on the stunning Lamborghini Terzo Millennium concept, the all-electric prototype, and later used on the Lamborghini Sián, and taken to the extreme on the Lambo V12 Vision Gran Turismo … that styling touch is also used on this yacht, and it’s just another way to link the design of this water toy to the street toys. 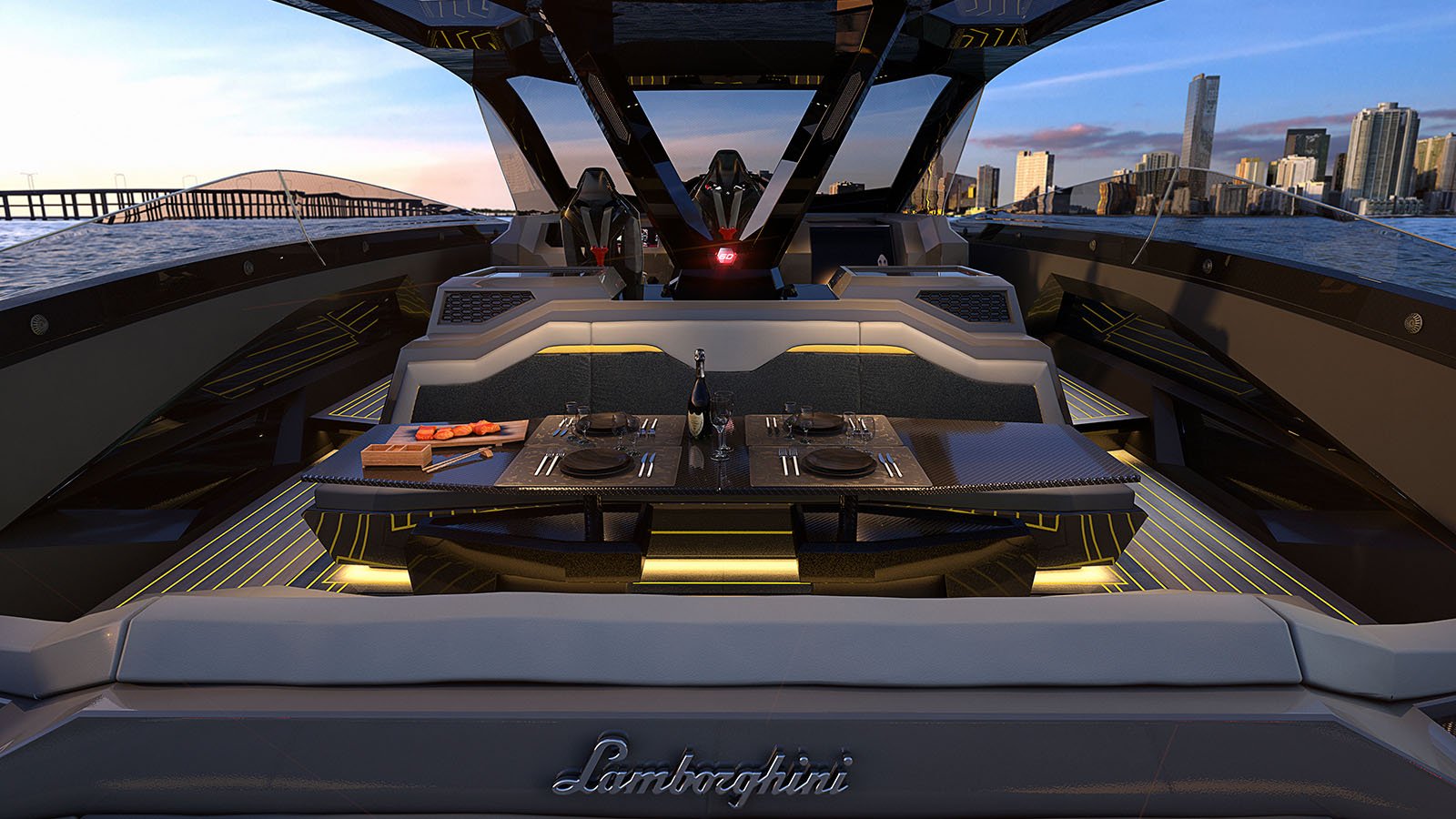 If you think the exterior of the Tecnomar for Lamborghini 63 looks spectacular, take a closer look at the deck and the interior, the link with Lamborghini styling continues on that level too, with lots of hexagon shapes and elaborate use of lightweight carbon fiber just about everywhere you look, clients have the option of two interior versions, but both come with lightweight materials specifically destined for maritime use, but always with a reminder of similar styling queues found on Lamborghini cars. 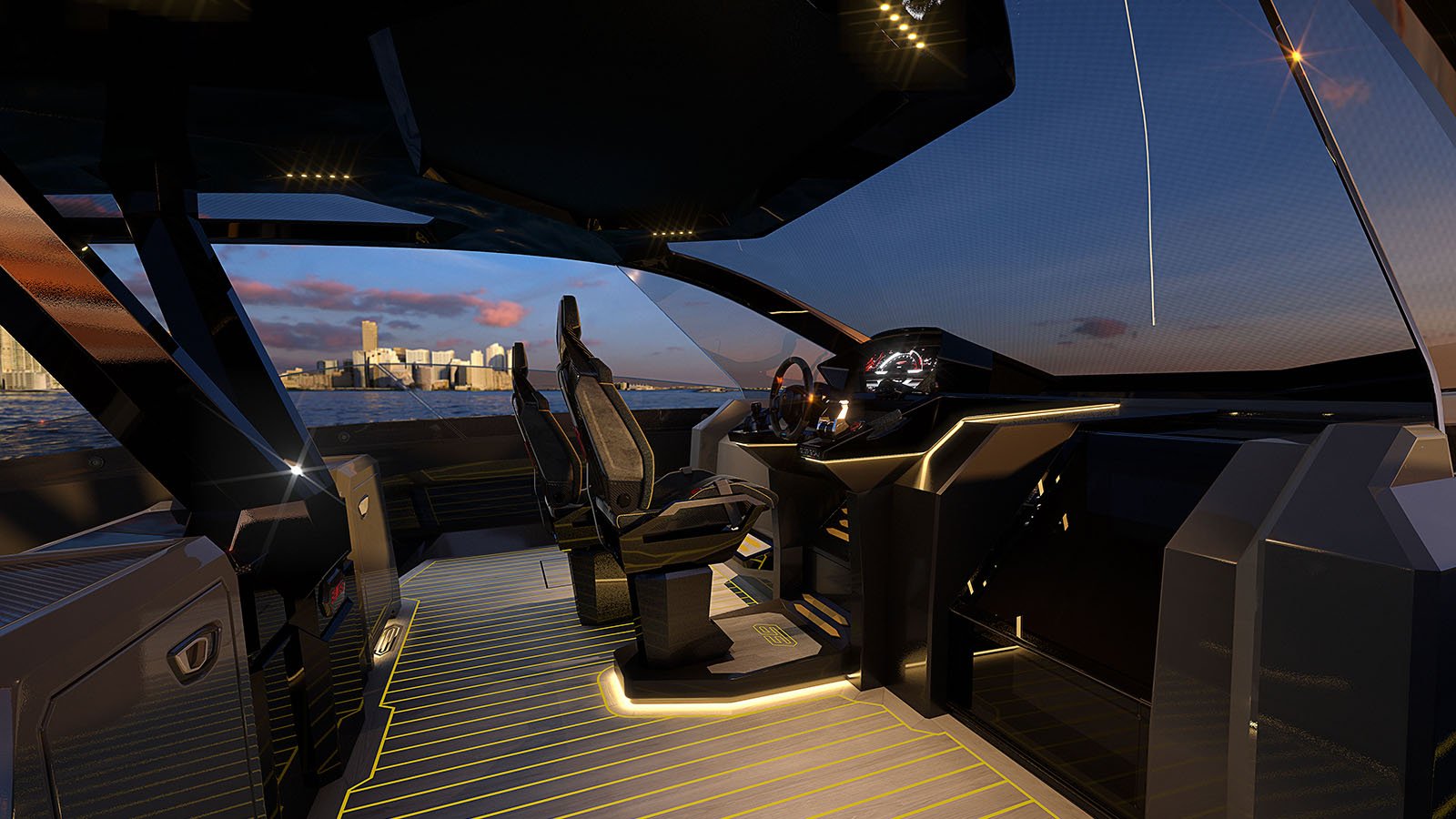 Hull #1 has her cockpit finished in mostly black, but clients can also opt for a blue, a green, a red, or a yellow finished upholstery, and even the seats on this Tecnomar look like they could have been lifted from a car, featuring the stunning Carbon Skin fabric from Lamborghini, the helm reminds us of the steering wheel and dashboard inside an Aventador, with everything integrated directly into the captain’s field of view, I haven’t seen a photo of the actual cabin on the Tecnomar for Lamborghini 63, but if that aft deck is any indication, I’m sure the interior will look extremely nice too.

Only 63 units of this Tecnomar for Lamborghini 63 will be built, this being hull #1, each with a base MSRP of €3,000,000 (nearly US $3,600,000 at the current exchange rates), rumor has it UFC champ Conor McGregor has one of these on order, I do wonder if we’ll be seeing some strangle colors on these Tecnomar yachts as we see on Lamborghini cars, that could be interesting for sure, and thanks to the extensive use of lightweight carbon fiber for the construction of this yacht, it is classified in the range of ultralight vessels.