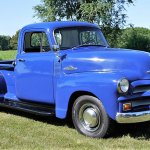 When people think of mid-1950s Chevrolets in a collector sense, they almost always picture the iconic “Tri-Five” passenger cars of 1955 through 1957, headed up by the Bel Air. But there were other important vehicles in the showrooms during that era which often get overlooked, such as Chevy’s attractive pickup trucks.

The Pick of the Day is a 1955 Chevrolet 3100 pickup listed by a private seller in Damiansville, Illinois, on ClassicCars.com.

Refinished in a vivid shade of blue, this pickup comes from a “transition” year for Chevrolet pickups, since there were two distinct body styles sold in 1955:  First Series and Second Series.

The First Series pickup carried forward with overall design language that debuted in 1947 on GM medium-duty pickups, namely, the “Advance Design.”  A handful of updates were made in 1954 including a curved one-piece windshield in place of the two-piece unit, a revised dashboard, horizontal cargo bed rails, round taillights, and a new “bull nose” grille in place of the previous five horizontal slats.

Midway through 1955, the Second Series pickup brought a full redesign called the “Task Force,” with a wrap-around window, a 12-volt electrical system, and a host of other updates.  That aesthetic continued through the end of the decade.

This First Series has reportedly undergone a refurbishment both inside and out, starting with an upgrade from the pickup’s original 235cid straight-6 engine.  Under the hood now resides a 305cid V8 bored to 327cid, according to the seller’s description.  The enhancements continue from there – among them, an Edelbrock carburetor atop an aluminum high-rise Edelbrock intake, an aluminum radiator, and a replacement 700R4 automatic transmission.

The exterior benefits from its own list of upgrades, including replacement wooden bed planks, shiny brightwork, and newly added turn signals.  The pickup’s build finishes off with such modernized interior conveniences as a newer sound system, “So you can enjoy your favorite tunes while you cruise,” the seller says.

The accompanying photo gallery provides a good look at this restored pickup including the reupholstered bench seat and custom bowtie-branded floor mats.  This 3100 looks every bit as worthy of the car show circuit as the Bel Air two-door hardtop that sat next to it in a showroom 66 years ago.

The seller is asking $29,000 or best offer for this First Series double-nickel pickup.

The post Pick of the Day: 1955 Chevrolet 3100 pickup shows off its ‘Advance Design’ appeared first on ClassicCars.com Journal.