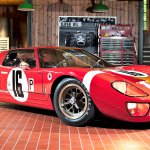 An exceptional group of historic race cars, including the first 1966 Ford GT40 Alan Mann Lightweight – one of just two GT40s to wear an aluminum body – will be offered by Gooding and Company during its Pebble Beach Auction in August.

The 17th annual auction, held August 13 and 14 at the Pebble Beach Parc du Concours during Monterey Car Week, will present the multi-million-dollar racers among a selection focused on sports, GT and competition cars.

“We’re thrilled to present this amazing selection of historic competition cars,” senior specialist David Brynan said in a Gooding news release. “This group represents the best of the best across the spectrum of postwar motor racing: Indy, Trans Am, and endurance racing.

“Not only are all these cars impeccably presented, they feature some of the most famous liveries in Motorsport, and have important connections to some of the top venues, teams, and drivers of the era, including Mark Donohue, Jackie Stewart, Peter Gregg, Bobby Rahal, Danny Ongais, and Sir John Whitmore.”

The six featured racing cars, with descriptions excerpted from the Gooding news release, are:

1966 Ford GT40 Alan Mann Lightweight (Estimate: $7 million to $9 million) – “The car offered here, AM GT-1, is the first of just two aluminum-bodied GT40s ever built, as the remaining three tubs ordered by Alan Mann (Racing) were incorporated into the (Ford) Mk II program. An exceptionally rare machine, AM GT-1 was completed in early 1966, finished in the iconic Alan Mann Racing livery, and equipped with a highly tuned 289 V-8 engine, five-speed ZF transaxle, Halibrand knock-off wheels, and featuring more than 100 updates over the standard Mk I competition car.

“AM GT-1 showed immediate promise in its racing debut at the 1966 12 Hours of Sebring, where it was driven by Sir John Whitmore and Frank Gardner and qualified in 7th position, running well before it was forced to retire with clutch problems. It next appeared at the Le Mans Test in April 1966, where it was the fourth fastest car behind Ford’s experimental J-Car, a Mk II GT40, and sister car AM GT-2.

“The current consignor acquired AM GT-1 in 1982 after it had been damaged in a road accident, and set about to restore the car to its original splendor. The restoration project was entrusted to famed GT40 expert Bob Ash of Georgia, who restored the car to exacting standards over a period of nearly 15 years. Today, the car appears just as it did at the 1966 Le Mans Test, wearing its classic Alan Mann Racing colors and race number ‘16.’

“This is undoubtedly one of the most unique and historically significant GT40s to come to public auction in years. AM GT-1 has never before been offered for public sale and is being offered after nearly 40 years in the hands of one passionate owner.”

1980 Porsche 935 K3 (Estimate: $2.5 million to $3 million) – “Introduced in 1976 as the Group 5 racing version of the turbocharged 930, the Porsche 935 went on to become one of the most successful models in the history of sports car racing. Throughout the late 1970s and early 1980s, the 935 utterly dominated endurance racing, winning the FIA World Championship for Makes each year from 1976 to 1979 and capturing outright wins at the 24 Hours of Le Mans, the 24 Hours of Daytona, and the 12 Hours of Sebring.

“The car presented here is a 1980 935 K3, the most successful of the Kremer-developed 935 models, which features technically advanced air-to-air intercoolers and dramatic bodywork designed to mimic Porsche’s own 935/78 team car. This particular 935 K3, chassis 000 00027, was purchased new by the legendary Interscope Racing team and finished in their iconic black livery with tri-color stripes.

“In its current ownership, this 935 K3 has been carefully prepared for an active career in vintage racing, with mechanical preparation overseen by the finest Porsche specialists in the US. Not only has this Interscope 935 been raced with success at Rennsport Reunion, the Monterey Motorsports Reunion, and Le Mans Classic, it recently received Best in Class at the 2021 Amelia Island Concours d’Elegance, where Porsche 935s were honored with a featured display.”

1986 March 86C (Estimate: $1.5 million to $2 million) – “A tried-and-true racing champion, this 1986 March 86C, chassis 86C-13, was famously driven to victory in the 1986 Indy 500 by Indianapolis Speedway Hall of Famer Bobby Rahal. The brainchild of March Engineering and Jim Trueman’s Truesports racing team, the March 86C was designed by Adrian Newey as a versatile car to be successful in various styles of races and tracks. Indeed, it proved itself in countless races, culminating in five more wins with Rahal in that season alone, and a 1st place finish in the 1986 CART Championship.

“The offering of 86C-13 presents the rare opportunity to own an Indy 500 winner and iconic competition car. It still retains the same Cosworth DFX turbocharged V-8 engine that powered its win at Indianapolis, and it has impeccable provenance, having been purchased by the consignor in 1990 directly from the Truesports racing team.”

“Throughout its extensive racing career, it was primarily driven by the incomparable racing superstar Mark Donohue. In its present state, chassis 7N163378 honors its lengthy career on the competition circuit, and has been meticulously restored by notable Chevrolet expert Kevin Mackay to the specification of its first victory.”

1977 Porsche 934/5 (Estimate: $1.3 million to $1.6 million) – “Specifically designed by Porsche to compete in the North American IMSA series, the 1977 Porsche 934/5 is a hybrid of the marque’s 934 and 935 models. This particular example, chassis 930 770 0951, was the first of only 10 934/5s built, and promptly made its competition debut at the 1977 12 Hours of Sebring, where it was entered by the legendary Porsche team Brumos Racing. It was driven by the team’s star driver, Peter Gregg, along with race car driver Jim Busby. Remarkably, this example qualified 1st and finished the punishing endurance race in 3rd place, all while wearing its iconic Brumos livery.

“Since then, this 934/5 has been owned by a number of collectors, and recently underwent a restoration under the consignor’s care to refinish the 934/5 in the exact specification and livery in which it appeared at its competition debut at Sebring in 1977. To date, it has only been shown once, at the Amelia Island Concours d’Elegance, and has never before been offered for public sale.”

1966 Lola T-90 (Estimate: $1 million to $1.4 million) – “This early model of the notable British race car engineering brand, Lola Cars, was a powerhouse in significant competitions of the era, paving the road for future examples from this historic supplier of competition champions.

“One of only three Lola T-90s built, this particular car, chassis 90/2, was driven by Jackie Stewart at the 1966 Indianapolis 500, where he was crowned Rookie of the Year. The famous F1 driver had a substantial career with this T-90, also racing it to a win at the Fuji 200 in Japan for legendary car owner John Mecom.

“Not only was chassis 90/2 a formidable competitor, but its sleek, performance-driven design and striking livery make it a head-turner off the track, too. Chassis 90/2 is powered by Ford’s famous four-cam V8 racing engine and boasts an aluminum monocoque supported by steel subframes. It has been in the consignor’s possession since 1995, when it was purchased from the significant collection of David Uihlein.”