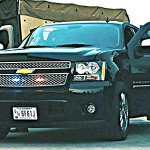 Chevrolet Suburban has been awarded its very own Hollywood Walk of Fame star, honoring its many appearances in feature films and TV shows. But instead of being placed on Hollywood Boulevard, the iconic star was installed in Arlington, Texas, where Suburbans are built, and in the state where a lion’s share of them are sold.

Suburban first received the Award of Excellence recognition in 2019 from the Hollywood Chamber of Commerce, the first vehicle so awarded “for its iconic role in film and television,” according to a Chevrolet news release.  It’s also the first such star placed outside of California.

While Suburbans are often seen on screen ferrying government and business officials from place to place (and usually painted black) or providing secure transportation for various secret agents and police personnel, the full-size SUVs have also starred in more complex roles.

They portrayed sinister Decepticons called Dreads in the movie Transformers: Dark of the Moon, as well as the doughty 1947 family transport in Harry and Hendersons. Suburbans have appeared in many TV shows, including The Sopranos, with James Gandolfini as Tony behind the wheel in the series’ first few years.

“The Award of Excellence star recognizes the Suburban’s robust acting career, appearing in more than 1,750 films and TV series,” Chevrolet says in the news release. “The Suburban is Hollywood’s longest-working actor and an icon on the Hollywood scene.

“The Suburban is a one-of-a-kind character actor with its own persona. Its career in Hollywood began in 1952, when it first appeared on the silver screen.”

Although Chevrolet does not say as much, Suburban’s first appearance in a movie was apparently in The Day the Earth Stood Still, one of the best-known science-fiction films of all time.

“There is no other character actor like the Chevy Suburban,” Ghadban said. “It can fit into any type of role with ease. When it arrives in a movie or TV series, it can instantly bring a feeling of significance, suspense or knowing the day is about to be saved.”

The Arlington Assembly Plant has produced more than 12 million vehicles since it opened in 1999, and currently assembles Suburbans and Tahoes, as well as GMC Yukons and Cadillac Escalades, for 33 countries around the world. There are 5,677 employees working at the plant, which builds about 1,200 of the full-size SUVs every day.

The post Chevy Suburban receives Hollywood star for its many film and TV roles appeared first on ClassicCars.com Journal.