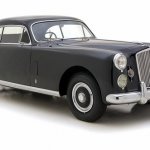 Talk about a car that comes with a story, the Pick of the Day is a 1951 Bentley Cresta, a historically significant and rare vehicle that has had only two owners since its multi-national production.

The car is being advertised on ClassicCars.com by a dealer in St. Louis that shares the various facets of the car’s story:

“As Europe resumed business in the wake of World War II, France was understandably reluctant to trade with its former enemies,” the dealer reports. “This fact was none-more true than in the traditionally proud French motor industry, who shut out any vehicles of German or Italian origin from the prestigious Paris Salon in 1946.

“The ban was particularly painful for Italian Carrozzeria desperate for business during reconstruction. Battista ‘Pinin’ Farina wasn’t about to take such a prohibition laying down and cheekily drove to the auto show, parking his dramatically styled Alfa Romeo and Lancia right outside the Grand Palais, just out of the jurisdiction of the event organizers. While the stunt garnered public attention, it also enraged motor show officials, all but guaranteeing the famous coachbuilder was branded persona non grata the following year.

“But Jean Daninos, the boss of the French industrial firm Facel-Metallon, was not bothered by such politics. As an avid petrol head with a taste for exclusive motorcars, he saw a business opportunity and a way to help Pinin Farina boost his business after a devastating workshop fire.

“Daninos, Farina, and Walter Sleator (head of Parisian Bentley distributor Franco-Britannic Automobiles) converged to develop an exclusive new motorcar based on the (Bentley) Mk VI. With its Pininfarina-designed and Facel-built coachwork, the new Cresta (was) the first true sporting Bentley of the post-war era.”

The dealer notes that Cresta historian Dominique Bel, who is working on a book to be titled Cresta, Les Belles Oubliees, shared his research on the model’s history.

Thus we learn that the first two or perhaps three Crestas were built in Italy by Pininfarina, and they were distinguished from those that followed by having a more prominent, wide-mouth grille.

Speaking of those that followed, total production at Farina and Facel were just 12 or 13 vehicles, though the dealer notes “the car’s influence outweighs its minuscule production.”

“The remaining bodies came via Facel’s coachworks, and at the behest of Crewe (Bentley’s home base in England), featured a more traditional and recognizable Bentley grille shape, cleanly integrated into the body,” the dealer notes, adding that “Bentley kept a close eye on the project, and it foreshadowed the works-backed Mulliner fastback that followed a few years later.

“For their part, Bentley offered bare chassis with a lower-rake steering column and other minor accommodations for this semi-official project. Between 1948 and 1952,”

The car on offer is chassis B167JN, the final first-series example and a car that has had only two owners since new. It’s also a car that has never been restored.

“It is offered to the public for only the first time in over 20 years and only the second time in 70 years,” the dealer reports.

According to research by Bel, the car originally was owned by Swiss businessman Francois Lugeon, who also served as a diplomat. Lugeon had inquired about a new Bentley Mk VI in 1949 and ordered the Cresta after seeing one at the Paris Salon.

He took delivery of his in November 1950, gaining a 10 percent price reduction on the chassis because of his diplomatic status, “though a request for the same deal on the coachwork was met with polite pushback from the Facel agency,” the dealer reports.

Lugeon also went to Italy to see how his car was coming along, “only to be directed back to Paris!”

But he must have been pleased with the results.

“He drove and maintained the Bentley until he died in 2001, when it passed to its second, and only other owner,” the dealer says, noting that the car “has aged gracefully, with an appropriately rich patina that is like a badge of honor.

“Pulling the signature flush-mounted Pininfarina door handles reveals the beautifully preserved original upholstery. The driver’s seat shows considerable cracking yet is not beyond the realm of careful preservation, while the intricate door panels and rear seats are in fine order.

“Carpets and fixtures remain intact, and the wood fascia and simulated woodgrain door caps show appropriate levels of wear. The original instruments and radio are in place, and the boot houses the original 3-piece fitted luggage – believed by Dr. Bel to be the only set extant.

“The original, numbers-matching engine runs beautifully, sending power through a four-speed manual gearbox with Bentley’s delightfully mechanical gated floor shifter. The car drives remarkably well, and while the previous owner did use it on the occasional tour, it has been some time since it was last driven extensively, and would benefit from a thorough going-through to prepare it for road use.

“Since joining the most recent owner’s collection in 2001, the Cresta has made occasional outings — including the exclusive, invitation-only Jewel That Is Europe rally in 2008 and the Amelia Island Concours d’Elegance in 2010. It is an obvious candidate for preservation class honors at virtually any significant concours event, yet could also serve as a marvelous basis to restore to its original splendor.”