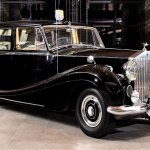 All 26 grand luxury cars from Rolls-Royce and Bentley were sold by RM Sotheby’s during the Passion for Elegance auction in Liechtenstein, with a total result of CHF11,134,125 (CHF is the symbol for Swiss Franc; the total in US dollars is $12,126,098, including auction fees).

The cars came from a single private collection, and RM Sotheby’s notes that 21 of them sold for more than their pre-auction high estimates. Considerably more in the case of the top-selling car, a 1954 Rolls-Royce Phantom IV Limousine “Princess Margaret” by H.J. Mulliner, which nearly quadrupled its expected top value.

“Of particular interest to collectors is the fact that the example offered was built for HRH, Princess Margaret, completed and delivered to her in 1954, boasting a plethora of bespoke, luxury features, befitting her position as a senior member of the British Royal family,” RM Sotheby’s says in a news release. “It is a car Princess Margaret retained for 13 years and which covered 27,000 miles in her ownership, and in which she was frequently seen and photographed.”

Also going over a million was a 1963 Rolls-Royce Silver Cloud III Drophead Coupé Adaptation by H.J. Mulliner, with strong celebrity provenance, having been purchased new for the legendary Italian actress Sophia Loren by her husband, movie producer Carlo Ponti.  The car, one of only 25 left-hand-drive models produced, was featured with Loren in the classic film Yesterday, Today and Tomorrow. It sold for CHF1,045,625 ($1,138,783), nearly double its pre-auction estimated value.

The top-10 highest sellers at the RM Sotheby’s auction were:

“This was a stunning collection of cars that represented one man’s passion for the Rolls-Royce and Bentley marques, and we are delighted all the cars sold so well,” said Tonnie Van der Velden, car specialist at RM Sotheby’s. “It is also a significant indication that the market for these luxurious British cars is extremely robust.”