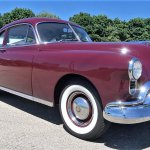 The Pick of the Day is a sweet-looking 1949 Oldsmobile 76 club coupe with a nice family back story, and which appears to be completely refurbished and entirely drivable.

The ‘76 was the smaller base model for the restyled Oldsmobiles at that time, on what was called the B-body chassis, and this car has remained true to its original style and purpose.

The Jefferson, Wisconsin, dealer advertising the Olds on ClassicCars.com wrote an extensive history and description of the attractive 72-year-old 2-door, so I’ll just let the ad tell the tale:

“This nice old car has been driven just over 88,000 miles,” the seller says of the Oldsmobile.  “The most recent miles were added by the daughter of an Illinois farmer who owned it, as part of his collection, for many years.

“She and her husband were gifted the car almost 20 years ago.  They restored it to be a reliable and attractive driver.  She commuted with it during dry summer days.  It is ready to be driven and enjoyed.  Now that her father has passed, they decided to sell the car.

“Her father lived in western Illinois.  She couldn’t recall where he found the car, but it seems that it probably wasn’t too far away.  I can tell that it probably didn’t see much salt, as the floors, trunk, inner rockers and floor supports are solid.”

The dealer notes that the Oldsmobile has been totally redone and that it looks and runs great.

“The restoration was pretty extensive,” the dealer says.  “I was impressed that both the 257-cubic-inch Big Six engine and Dual Range Hydramatic transmission had been rebuilt.  The engine bay was completely rewired.  The fuel, cooling and charging systems were refurbished.

“You will see a new fuel tank, new lines, new shock absorbers, new sway bar links and a new exhaust system beneath the car.  The braking system was all refurbished.  The carburetor and the ignition system were rebuilt.  A new set of Coker Classic bias-ply wide whitewall 7.50×15 tires were installed.

“The cosmetic portion of the restoration involved a complete rehabilitation of the interior.  The old rubber floor covering was replaced with carpet.  The headliner, package tray and sail panels were all recovered.  The door panels, seats and kick panels were recovered.  The trunk was provided with an upholstered lining.

“The dash has been repainted.  All gauges work properly.  The clock was ticking after being wound.”

The Oldsmobile looks very attractive in the photos with the ad, which the seller says was painted Garnet Maroon over a straight body and with all the trim and chrome parts replated and polished.

“Other than a couple of very small chips (touched up), the paint is in great condition,” the ad says.  “The combination of the gorgeous Garnet Maroon and the brilliant bright work is stunning.”

The asking price for this handsome veteran Oldsmobile is $19,995.

“I have been pursuing Oldsmobiles for a long time,” the seller adds.  “This is the first club coupe that I have found to be in great condition and at a reasonable price.  Yes, it would be better if it were a V8-powered car.  But it certainly would not be so reasonably priced.”

And might I add that this ClassicCars.com listing demonstrates how to properly advertise a vehicle, with the effort put in to tell its story and describe its current condition. Way to go!

The post Pick of the Day: 1949 Oldsmobile 76 club coupe, restored and ready to go appeared first on ClassicCars.com Journal.