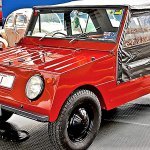 Just when you thought you’ve seen every permutation of the Volkswagen Beetle, from the Meyer Manx to the Thing, and every kind of beach buggy and custom off-roader imaginable, along comes something completely different.

This one is called the Country Buggy. It comes from the land down under, where it was originally designed in the 1960s with Australian military applications in mind, using Type 1 (Beetle) and Type 2 (microbus) components, including the ubiquitous flat-4 air-cooled engine.  The simple doorless bodywork was flat-stamped steel, with Beetle headlamps pushed into the fenders.

The Country Buggy became a project spearheaded by Volkswagen’s Australia division, envisioned not only as a military vehicle, like the Jeep in the US, but as a fun and hardy on- and off-road vehicle for exploring the outback or traversing the shoreline. But things changed during the ‘60s, and the Country Buggy never fulfilled the vision.

“Though the project had promised when it began for Volkswagen Australia in the early 1960s, by the time the first Country Buggy models left the factory in 1968, conditions warranting its build had changed,” Volkswagen said in a news release.

“The final model wasn’t suited for military applications, and with the Type 181 (the Thing) launching globally, few customers in Australia saw the appeal. After a brief run of just 1,952 vehicles, Country Buggy production ended in Australia.

“And in 1972, Volkswagen invested with other firms in local production in the Philippines of a lightly modified Country Buggy called ‘Sakbayan’ – a Filipino portmanteau that translates to “people’s car,” which remained in production for several years.”

Country Buggy and Sakbayan survivors are collector’s items today, rare outside Australia and the South Pacific, and still cherished by those who appreciate the creativity of Volkswagen variations and the lure of a vehicle built to go anywhere.