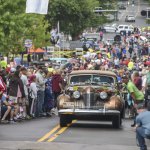 The Great Race, a competitive cross-country rally for vintage vehicles, launches its 2021 edition October 19 at Alamo Plaza in San Antonio, Texas, and is scheduled to finish some 2,300 miles and 9-days later at the Hyatt Regency in downtown Greenville, South Carolina.

The event, backed by Hemmings Motor News, the Hagerty Driver’s Club, and Coker Tire, is being staged for the 37th time. It is a time/speed/distance endurance rally that in 2021 has drawn 120 vehicles in several categories. All the vehicles are pre-1974 models.

Teams competing for more than $150,000 in prize money include not only those from the United States and Canada, but from Japan, England and Australia.

“Each stop on the Great Race is free to the public and spectators will be able to visit with the participants and look at the cars up close for several hours,” organizers point out in the pre-race news release.

The following is the schedule of lunch and overnight stops:

“The Great Race, which began 38 years ago, is not a speed race, but a time/speed/distance rally,” organizers note.

“The vehicles, each with a driver and navigator, are given precise instructions each day that detail every move down to the second. They are scored at secret check points along the way and are penalized one second for each second they are either early or late. Speed changes, challenging roads and the feat of keeping a vintage car running over nine days and thousands of miles makes for the ultimate test for these diehard car enthusiasts.”

The rally is named for the 1965 movie, The Great Race, starring Tony Curtis, Jack Lemmon, Natalie Wood and Peter Falk. In turn, the movie, a comedy, was inspired by the 1908 New York to Paris motorcar race.

For more information about The Great Race, visit its website.