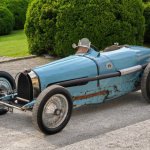 Among nearly 1,000 vehicles on display at England’s Concours of Elegance, held September 3-5 at the Hampton Court Palace, will be a 1934 Bugatti Type 59 racer, chassis no. 59124, that’s believed to be just one of six or seven built.

“The Bugatti Type 59 is famed as the most beautiful of all Bugatti’s motorsport creations and one of the best-looking racing cars of all time,” Concours of Elegance says in its news release.

“Unlike many cars of its time, the Type 59 opted for a shape with the width of a two-seater so the driver could sit low next to the gearbox – Ettore Bugatti didn’t like having to sit his driver high over the propeller shaft as he would have to in a tighter, single-seat body.”

The blue-finished body, held up by signature “piano-wire” wheels engineered to complement the racer’s proportions, tapers off into a sharp point at the tail where the fuel tank is located.

Power comes from a straight-8 cylinder with “two overhead camshafts driven by a train of gears from the rear of the crankshaft, this drive also being taken to the Bugatti-built supercharger mounted on the right-hand side of the engine, with two down-draught Zenith carburetors on top,” Concours of Elegance adds.

As beautiful as the Type 59 is, it unfortunately was too late in development to outrace its competitors on the Grand Prix circuits. However, this example did place fourth at Spa-Francorchamps with Robert Benoist driving.

Alongside this 1934 Type 54 will be a number of other special features and displays, including a Gulf vs. Martini celebration of rare future classics and a line-up of coachbuilt Rolls-Royces, along with a collection of 95 British cars to celebrate Queen Elizabeth’s 95th birthday.

For more information about the Concours of Elegance, visit the event website.

The post Bugatti’s beautiful 1934 Type 59 racer to be displayed at Concours of Elegance appeared first on ClassicCars.com Journal.