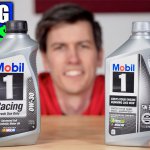 Every part of a modern race car is optimized to extract maximum performance—including the fluids that go into it. Specialized racing oil is a must in the paddock, but is it a good idea to use that in your road car?

First off, Fenske emphasizes that racing engines don’t have much in common with road-car engines. Pushrod V-8s like the ones used in NASCAR disappeared from the average American car decades ago, and racing engines in general have a very different duty cycle. They’re flogged (a NASCAR V-8 can rev to 10,000 rpm and spend 90% to 95% of a race at full throttle), but also have fairly short maintenance intervals. NASCAR engines have their oil changed about every 500 miles and are only expected to last about 1,500 miles, Fenske noted.

NASCAR oil is also fairly unrestricted (rules can vary by race series), giving teams more leeway to look for competitive advantages, Fenske said. Teams tend to use thinner-weight oils to reduce frictional losses and maximize power. That’s not great for longevity but, remember, the engine only needs to last 1,500 miles. Road-car engines, on the other hand, are expected to last hundreds of thousands of miles, so that kind of tradeoff isn’t possible.

Racing oils and road-car oils do have some commonalities, though. They use a lot of the same additives, such as detergents, dispersants, anti-foaming agents, antioxidants, and rust inhibitors, Fenske noted.

However, the difference is in the details. Oils used for road cars are designed to meet a long list of regulations and requirements set down by individual automakers. In NASCAR where, again, rules governing oil are fairly loose, teams can optimize an oil for one specific engine design. It’s really that process that makes racing oil work, and it’s just not practical for individual road cars. Unless you have your own laboratory and a lot of patience, at least.

The post Should you use racing oil in your road car? appeared first on ClassicCars.com Journal.