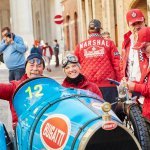 “Beautiful to look at, tricky to master: driving a classic car requires skill and experience, qualities that age like fine wine,” the organizers note. “Because we want to pass on the passion for classic cars from generation to generation, we present to you, the Zoute Generations Rally, a concept that will fit your enthusiastic spirits.”

This rally is restricted to cars produced between the start of 1920 and the end of 1975 and is open to family teams and designed “to introduce the younger generations to the love of historic cars.”

There actually will be two rallies under the generations banner — a regularity rally with timed events, and a touring rally, a slower and shorter event.

With safety in mid, there were will be a series of what the organizers are calling “tests,” explaining that these rally stages are designed with the idea of “teaching our younger amateurs how to properly drive and master their beloved oldtimer” vehicles.

The rally begins at 7 a.m. in Ronse and ends with a barbecue at 7 p.m.

“Whether you want to participate together with your son, daughter, godson, goddaughter, (step)mom, (step)dad or grandparents, everyone is welcome at this wonderful summer rally,” the organizers add.

This is a wonderful idea that other classic car groups can and should emulate.

In 2019, Maria Jannace created the New York Concours and on October 29 she plans to expand what she’s coined the Rooftop Concours Series with a new event in Fort Lauderdale, Florida.

“As a former resident and small business owner of Fort Lauderdale, I’m thrilled to bring our concours series to my other favorite city which so perfectly mirrors the vibrant art scene and pulsating energy of New York.” Jannace is quoted in the announcement.

“The concours features a lively party atmosphere that celebrates the country’s love affair with the car and the special place it holds in our zeitgeist. Displaying a sophisticated gallery of automobiles that overlooks the ‘Venice of America’ during sunset, creates a truly stunning visual and emotional experience.”

The rooftop to be used for the concours is the Las Olas Parking Garage at the Intracoastal Waterway, which Jannace says will offer a 360-degree view of the skyline, beach and marina.

The concours is scheduled to coincide with the Fort Lauderdale International Boat Show, October 27-31.

In its heyday, the north Texas town of Nocona was known for producing cowboy boots and baseball gloves. In 2013, native son Pete Horton returned and opened a car museum and staged the Cruisin’ Nocona weekend.

On June 18-20, the town of 3,000 hosts Cruisin’ Nocona, Great Race Edition as the cross-country event for vintage vehicles visits the community.

Once upon a time, people touring national parks in the west were carried on White Motor Company buses, yellow buses for Yellowstone National Park and red ones at Glacier National Park. For the 2021 season, Glacier again is offered Red Bus tours in vintage equipment.

The Glacier buses were introduced in 1914. The current fleet includes buses produced in the 1930s.

Buses in the Glacier fleet, comprising 33 White Model 706 units, each seat 17 people and have roll-back canvas roofs for optimal viewing. The buses operate on gasoline and propane for a 93 percent reduction in emissions.

A well-preserved Lotus Eleven LM50 that was a works entry for races in France in 1957, and later was owned by Carroll Shelby Sports Cars, won Best in Show honors at the London Concours 2021.

The car originally was driven by Herbert Mackay-Fraser, an American known as “Mac” Fraser, concours officials noted – he also was the first Lotus works driver to die in competition. In addition to being owned by Shelby, the car was driven in US races by Jim Hall.

The Lotus returned to the UK in the 1970s and was restored in 2006. Since then, has competed in vintage racing events, winning the Madgwick Cup race at the 2017 Goodwood Revival.

Bicester Heritage, the British RAF training site that has been transformed into a collector car event facility and business center, staged its first post-pandemic Scramble earlier this month with around 4,000 visitors attending each of two days.

Among the highlights was a reunion involving an original Blower Bentley, team car No. 2, and relatives of driver Tim Kirkin, including his grandson and great grandson, who arrived in their own 1927 3/4.5-liter Bentley.

The Audrain Newport Concours & Motor Week, scheduled for September 30 to October 3 in Rhode Island, will include a Bonhams collector car auction, organizers have announced. The auction, featuring as many as 30 collector vehicles, will be held at the International Tennis Hall of Fame on October 1.

The Off-Road Expo Arizona, a major showplace for off-road vehicles and equipment, will move to a new location for its 2021 event scheduled for September 11-12. The new location is Phoenix Raceway, the NASCAR track.

With the British government extending its coronavirus pandemic restrictions, organizers of the Auto Royale Concours have announced the cancelation of that event, which was scheduled for July 16-18.

“Months of planning went into making sure that this was going to be something different on the British motoring calendar,” organizer Paul Mathers was quoted in the announcement. However, he added, “Our prime responsibility is making sure that people are safe and that the event that we organize works for our sponsors, participants and the general public and as things stand, we felt that we were unable to meet these obligations to the degree that we would wish.”