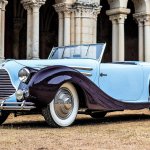 A fantastic vision of French artistry will be presented by Bonhams when a 1948 Talbot-Lago T26 Record Sport Cabriolet Décapotable (convertible) with exuberant bodywork by Figoni et Falaschi is offered at the Quail Lodge auction in Carmel, California, on August 13.

The Talbot-Lago is one of four such cabriolet models with coachwork by the celebrated carrossier, of which two examples survive, and it has been restored to exquisite concours-ready condition by marque specialist Tessier in central France, according to the auction description.

The estimated value is available from Bonhams by request only, which likely means multi-million-dollar bidding is expected.

“The flamboyant lines of the motorcar offered were based on their distinctive whale-like Narval design, during what is recognized as their (Figoni et Falaschi) last great period of creativity,” Bonhams says in a news release. “This powerful styling was matched by the performance from the 4.5-litre, 175 hp engine and the sporting handling afforded by the all-new Talbot-Lago chassis.

“Of the four bespoke cabriolet variants produced, only two have survived. This is a once-in-a-generation opportunity to acquire this spectacular machine, and to unveil it at a number of the most prestigious concours events.”

The Talbot started out life as a concours queen, Bonhams notes, debuting at the frou-frou Deauville Concours d’Elegance a few weeks after completion.  But it didn’t take long before the magnificent machine fell on hard times.

“Its first owner Gilbert Fayol, scion of the notable French industrialist family, who commissioned its bespoke bodywork, presented his elegant new motorcar at the fashionable event, along with his equally glamorous friend, Mademoiselle Michelle Cancre, the French female horse-jumping champion,” Bonhams relates in the release.

“However, less than a decade later, having been sold on, it had been driven to the point of unroadworthiness. It was discovered in a sorry state in the 1960s, albeit complete with its original chassis, bodywork and engine, by its next owner, who then stored the car for another 20 years in his countryside barn.”

Finally, the stylish cabriolet was rediscovered in the 1990s and was restored to a high standard, “meriting a place at the Parisian Rétromobile classic car show, where it was bought off the stand.”

It was later displayed in the Rosso-Bianco Collection in Germany until the collection closed in 2006.

That year also marked the Talbot’s first trip to Bonhams Quail Lodge auction, where it was sold to the prolific Texas car collector John O’Quinn, who commissioned a second complete restoration by Tessier.

“With O’Quinn’s untimely death due to a car accident, the T26 was sold along with the other 800 automobiles in his collection, the new owner returning the motorcar – in bare metal guise – to Tessier,” Bonhams said. “After eight years, the factory-correct restoration, using original finishes and materials, returned the 1940s belle to its former glory, as it is now presented.”

Bonhams will be conducting its 24th annual Quail Lodge Auction in August, held during Monterey Car Week of car shows, auctions, events and the 70th staging of the Pebble Beach Concours d’Elegance.

“We are also delighted to once again offer this spectacular automobile at Quail Lodge,” said Jakob Greisen, Bonhams head of US Motoring. “Its incredible history and provenance have been enhanced by its superb second restoration and it would be welcomed at the finest Concours d’Elegances around the world.”