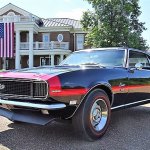 GAA Classic Cars will hold its 3-day summer auction July 22-24 at its newly expanded 5.5-acre facility in Greensboro, North Carolina, and featuring cars from the collection of Charlotte Hornets owner George Shinn, all offered without reserves.

About 650 collector vehicles are expected to cross the block at The Automobile Palace, an indoor, climate-controlled auction facility that the company owns, GAA says in a news release.  Further expansion of the auction space is getting underway and should be completed before GAA’s November sale, the release adds.

The George Shinn collection is a diverse group of 21 cars and pickup trucks in fine condition, most of them vintage Ford and GM favorites from the 1950s and ‘60s, both restored and resto-modded.  The collection also includes a 2019 Mustang Bullitt, a 2013 Porsche 911 S and a 1970 Mercedes-Benz 280SL.

Another notable collection at the GAA auction comes from long-time Tennessee enthusiast Don Bunch, who will have 25 vehicles offered at no reserve, with a wide range of special Detroit vehicles, including beautifully restored Cadillacs and rare Mercurys.  The oldest car in the Bunch collection is a rare pre-war classic, a 1920 Winton 6-cylinder touring car.

A group of eight spectacular custom Fords professionally built for display at SEMA is also on the docket, providing an opportunity to own some of the eye-popping show cars of the past few years.

“Other featured vehicles for July include a ’72 K5 Blazer built by ‘Murder Nova’ owner Shawn Ellington from the TV show Street Outlaws, and a custom ‘58 Corvette Resto-Mod built by Jeff Hayes of American Speed Shop,” GAA says in the release.

Other noteworthy auction cars include two rare Mercury Sun Valley hardtops, 1954 and ’55 models, with their glass roof sections and luxury features.  The 1954 Sun Valley even has a continental-kit spare tire.

And For North Carolina’s numerous NASCAR fans, there’s a wonderfully accurate replica of the Fabulous Hudson Hornet, a resto-modded 1953 coupe being sold by Howard “Humpy” Wheeler, who operated the Charlotte Motor Speedway for 35 years and drove this Hudson with his grandson in the cross-country Great Race.

In an authentication letter from Wheeler with the car’s catalog description, he notes that he had the Hudson’s body built onto a Camaro chassis and suspension with a 350cid Chevy engine for improved reliability and drivability.

He dedicated the car to the late actor Paul Newman, who voiced Doc Hudson in the Cars films, and who Wheeler says was a close friend.  Wheeler also was in Cars 1 and 3, he says, voicing the character of Tex, the bullhorn Cadillac.

For more information about the Greensboro auction, visit the GAA website.