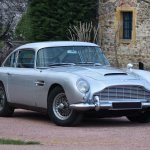 Imagine it’s 1980 and you’ve just used your 1965 Aston Martin DB5 for the drive away from your wedding ceremony. What do you do next with such a car?

In this case, the owner – the second person to own this Bondmobile in Silver Birch Metallic paint – put the car in the garage, where it has remained for decades.

But the car will emerge from hiding July 19 to cross the block at Artcurial Motorcars Monaco 2021 summer sale, scheduled to take place at the Hotel Hermitage de Monaco.

Another star of the sale figures to be a 1968 Lamborghini Miura P400 purchased in 1969 by Paul Bouvot, who at the time was the head of design for Peugeot. The Miura is white with a black interior and obviously stood out parked among the Peugeots driven by others working in the French automaker’s design studios.

The car eventually was acquired by an Italian-born collector living in the Burgundy region of France. The owner has consigned the car to the Monaco auction along with several others, including a Lamborghini Islero S, a Maserati Bora and a Ferrari 512 BB.

Also on the docket is a 1984 Peugeot 205 T16, the only such car done in blue and white Pioneer livery and formerly owned by Jacky Setton, chief executive of Pioneer-France, which sponsored the Osella Squadra Corse Formula 1 and Peugeot rally teams.