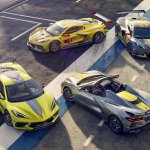 “Racing has been part of the Corvette’s DNA from nearly the beginning,” Laura Klauser, sports car program manager for General Motors, was quoted as the cars were unveiled.“Both the Corvette Stingray and C8.R have seen tremendous success capitalizing on the benefits of a mid-engine platform – and we’re just getting started.”

C8.R is the latest factory-backed Corvette race car, which Chevrolet notes was dominant in the IMSA GTLM category, sweeping the manufacturers, team and driving championships in 2020. The pair of Corvette C8.R racers won seven pole positions and six races in 2020.

The special-edition package will be offered on 1LT, 2LT and 3LT 2022 Corvettes, including coupes and convertibles, although not on the Z51 version. Each car will be powered by an upgraded LT2 6.2-liter V8 that features revised injection, improved engine calibration and enhanced active fuel management. The engines are rated at 490 horsepower, or at 495 with an available performance exhaust system.

The IMSA GTLM Championship Edition package starts at $6,595. Base price for the 2022 Corvette coupe is $62,195 with convertibles starting at $69,695, Chevrolet said, adding that dealers will begin accepting orders for the vehicles on July 1 with production at the Bowling Green, Kentucky, assembly plant beginning in the third quarter of 2021.