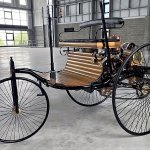 It’s ironic that the vehicle with the oldest model year listed for sale on ClassicCars.com is also nearly new. That phrase might need a little more explanation. The Pick of the Day is in fact a newly built replica, designed after the vehicle that started the entire automotive revolution: an 1886 Benz Patent-Motorwagen listed for sale by a private seller in Solon, Ohio.

The listing dives right into a history lesson that sums up this vehicle’s significance.

“When Karl Benz applied for a patent on January 29, 1886, for his vehicle with gas engine operation, little did he realize that his invention would change the world,” the seller says in the ad. “Patent DRP 37435 is regarded as the birth certificate of the automobile. With test drives carried out in the autumn of 1885, the Benz Patent Motor Car was the world’s first automobile.”

The 30,114 vehicles listed for sale on ClassicCars.com at the time of this writing range from model year 1886 through 2021. Every era across that 135-year span has its own niche and following.

Some people go crazy over pre-war metal. Others stick to the muscle cars of the 1960s. And believe it or not, there are even collector car enthusiasts who gravitate toward the neo-classic models of the 1980s and 1990s.  And that’s all okay.

But this 1886 vehicle’s level of “old” goes above and beyond, and it was assembled in a fashion that the seller states is “exact in the tiniest details.”

“The finish work of this early model is absolutely show-quality in every way,” the ad reads.

Reportedly one of only 175 produced by Bentley Engineering in the UK for Mercedes-Benz, this vehicle was assembled with the purpose of spending its life on display inside a Mercedes-Benz dealership. However, its mechanical roadworthiness checks out, the seller states, and it could be driven.

“The vehicle is drivable just as the original was and will delight both the driver and onlookers with its unique operation,” the ad says.

Power for this two-seater comes from a 1.0-liter, single-cylinder, 4-stroke gasoline engine that delivers 2-3 horsepower via a primitive version of a continuously-variable transmission. While top speed is not discussed, one would imagine that this vehicle is best kept on surface streets rather than freeways.

Just don’t try taking it to the local Mercedes-Benz dealership for an oil change.

The seller is asking $52,900 for this reconstructed artifact of automotive history.

The post Pick of the Day: 1886 Benz Patent-Motorwagen, a replica of the first car appeared first on ClassicCars.com Journal.