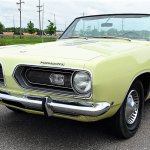 The second-generation Plymouth Barracuda was a cleanly styled variation of the classic pony-car formula, and while not yet a paragon of performance, it did present a viable Mopar alternative to Mustang and Camaro.

The Pick of the Day is a 1968 Plymouth Barracuda in what appears to be very good original condition, and as an added incentive, it’s a fairly rare convertible model.

This Barracuda is motivated by a 318cid V8, the smallest of the three V8s available that year but still generating a respectable 230 horsepower, and it’s linked with a 3-speed automatic transmission.  Mileage is 87,614, according to the Kansas City, Missouri, dealer advertising the droptop on ClassicCars.com.

Still built on the same architecture as the compact Valiant, the 1967-69 Barracudas had engine compartments that would not accommodate the big-block or Hemi engines that were powering the Mopar muscle cars at that time.  That changed in 1970 with the bigger, wider ‘Cudas and their renowned dragstrip performance.

But these earlier models were known for their sporty handling and overall drivability, as well as their attractive styling.

“Before it was the face of American muscle known worldwide, it was a smaller yet still-capable pony car,” the dealer says in the ad. “This yellow with black interior 1968 Barracuda is both classic in looks and performance.”

The convertible is fully equipped with a power top, power steering and air conditioning, the seller notes, adding that it has had only two owners and stands in ready-to-go condition.

There’s no information in the ad about restoration history or whether the Barracuda has its original paint and interior, but the photos show that it’s very presentable. None of the photos show the convertible with its top up, however. The seller mentions that the hubcaps are from a ’70 model.

This appealing Barracuda convertible, looking like a sweet ride for a summer’s evening, is priced at $29,000.