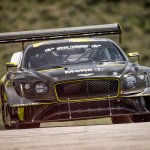 One of the most-interesting aspects of the annual Pikes Peak Hill Climb is that, unlike most other motorsports venues, corporations build cars specifically for this one single event.

Case in point: Bentley, which has been doing dynamic testing of its Continental GT3 Pikes Peak racer, which later this month will apply its  more-than 750 horsepower and 737 pound-feet of torque from its twin-turbocharged 4.0-liter V8 to see how quickly it can negotiate a route that climbs 4,800 feet in elevation and has 156 turns over a course that’s a mere 12.42 miles in length.

Those power numbers are output at the high air pressures found at sea level. Before the run up the hill, Bentley will boost those figures by installing different pistons and connecting rods so it can turn up the turbocharger boost. The car also has with a reinforced carbon fiber intake manifold and a custom, 3D-printed, one-off Inconel exhaust manifold to deal with the extra boost.

Bentley says the car will use renewable fuel during the climb. The engine runs on 98-octane fuel made from biologic components that reduce greenhouse emissions by as much as 85 percent.

The car was built with British-based GT3 customer racing team Fastr on a revised chassis and using 3D-printed parts, with a 30 percent increase in downforce compared with the production car. The brakes are water-cooled to optimize performance under the extreme demands of the climb.

Bentley recently announced that the car has completed three dynamic test sessions in preparation for the Pikes Peak International Hill Climb, scheduled for its 99th running June 27 just west of Colorado Springs. The effort is part of Bentley’s bid to become known as the world’s leading “sustainable luxury mobility company,” an effort that includes not just electrification of vehicles but the use of renewable liquid fuel for internal-combustion engines.

Bentley also hopes to complete what it’s calling the “triple crown” of Pikes Peak records by adding the Time Attack 1 class to its previous Production Car (2019) and Production SUV (2018) record runs. As with those record runs, Rhys Millen will be driving the Continental GT3 racer.

In addition to engine development on the test bed i England, dynamic evelopment testing of the car so far has involved laps at Willow Springs in the California desert and in the mountains near Aspen, Colorado.