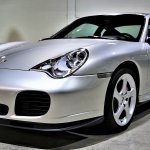 One of the most iconic Porsches ever is the 911 Turbo, initially introduced in the US in 1977 as the Turbo Carrera. In each succeeding generation, the 911 Turbo has gotten faster, better handling and easier to drive.

The landmark Porsche 911 Turbo, in my opinion, came in the 996 series as a 2001 model. While the styling of the 996 was a bit polarizing, the Turbo was a whole different thing.

The Pick of the Day is a 2003 Porsche 911 Turbo coupe with a 6-speed manual transmission and in “absolutely pristine” condition having covered just 6,900 miles since new, according to the Chatsworth, California, dealer advertising the Porsche on ClassicCars.com.

The 996 Turbo is powered by a very different water-cooled engine than the non-turbo car. The 3.6-liter twin-turbo flat-6 engine designed by Hans Mezger was derived from the 1998 Porsche GT1 racing car, whose engine in turn had its origin in the mythic Porsche 962 racing cars.

These engines dominated endurance racing from the 1980s thru the early 2000s and are as special as a Colombo- or Lampredi-designed Ferrari engine or even the Cosworth DFV. It is important to note that Mezger also designed the flat-12 engine for the conquering Porsche 917.

In addition, the Porsche 996 Turbo does not have any of the notorious IMS bearing issues that the non-turbo cars have. The twin-turbo engine is as reliable as a hammer, and there is not a less-expensive supercar to service, other than a Corvette Z06 or ZR1.

The best part about the 996 Turbo is that it is a true supercar and just as usable for a track day as a trip to the grocery store. The Porsche 996 Turbo is truly the thinking person’s supercar.

This Porsche 911 is finished in Classic Arctic Silver paint over a black interior and is equipped with a number of factory options: heated front seats, wheel caps with colored crests, lumbar supports for both seats remote CD changer and supple-leather upholstery. These 996 Turbos all came standard with bi-xenon headlamps and alcantara headliners.

That might seem like a lot of money for a 996 Turbo, but these cars have been racing up in value during the past few years, and the going rate for these Porsches with 60,000 miles is now around $60,000, making this super-low-mileage original look to be priced very nicely.