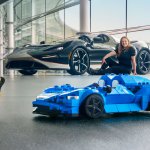 New to Lego’s Speed Champions line is a mini-replica of “one of the world’s most exclusive open-top speedsters,” Lego says in its news release about the playset.

The mini-supercar, a McLaren Elva, comes with a wide chassis, two-seat open cockpit and AAMs vent, just like the real thing.

Brown helps in developing McLaren Ultimate Series models, like the Elva, from concept to production.

“Rachel has worked on incredible vehicle projects like the McLaren Senna GTR, and also supported the design creation of the LEGO Technic McLaren Senna GTR released in January this year,” says Lego.

“It is amazing to have witnessed the Elva go from boundary pushing concept drawing all the way to final vehicle production,” adds Brown. “It feels even more special now to see all of that hard work transformed into the LEGO Speed Champions Elva model for us to share with children and fans across the world.

“Ever since I was a child I have dreamed of driving and testing cars and I still can’t believe that it’s a part of my job. I hope that it inspires other young people to follow their passions and pursue careers in the automotive or design and engineering industries.”

The kit consists of 263 pieces and the assembled car measures over 1.5 inches high, 6 inches long and 3 inches wide.

“As a forward-thinking luxury brand, it is important to us at McLaren Automotive that who we work with reflects and echoes our passion for innovation and technology and also the value that we place around inspiring future generations through great design,” says Gareth Dunsmore, chief marketing office at McLaren.

“With LEGO Speed Champions, we hope to bring LEGO fans of all ages closer to the car of their dreams and encourage them to believe they can be whatever they want to be, just like Rachel has.

“We worked closely with the McLaren team from conception of the idea when the real Elva was still in early development, all the way through the design process.”

The Lego Speed Champion McLaren Elva kit is available for purchase on the Lego website for $19.99.