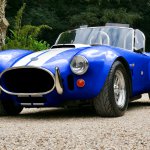 The rebirth of AC Cars continues with the British company’s announcement of pricing for its petroleum- and electric-powered Cobras.

Tracing its history to 1901 but best-known for supplying the sports car bodies that Carroll Shelby turned into Cobras, AC Cars now offers the AC Cobra Series 4, which it calls the “Cobra updated for a new age.”

The company also has announced the availability of its electric-powered AC Cobra Series 4 vehicles in two versions, one based on the AC Cobra 289 Mk II body and the other on the larger Superblower coachwork.

The cars are available with either a 230kW or 460kW battery-electric power system. AC says the lighter 230 version provides 4.9-second 0-to-62 mph acceleration with a range of 190 miles while the 460 does that same sprint in 3.8 seconds and offers 160 miles of range.

The electric powertrains are developed and produced by Falcon Electric.

“We are a hard-core technology company with the mission to make electric vehicles exciting,” Falcon proclaims. “Passion and emotion drive us; electricity and innovation drive our vehicles.”

“Eliminating excess weight brings with it positive benefits for the car’s owner.”

“Lower overall weight reduces energy consumption, allowing the batteries to deliver a longer range and the ability to drive the car to AC’s traditional high standards for speed and acceleration which the marque has achieved over many years.”

AC Cars says it is accepting orders for the electric Cobras, with customer deliveries beginning later this year.