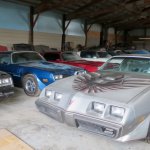 VanDerBrink Auctions, which specializes in the dispersal of large car collections in the American midlands farm country, returns to in-person onsite sales June 12 with the sale of what is being called the “Pontiac Hoard” at Tonganoxie, Kansas.

For those unfamiliar with Midwestern geography, Tonganoxie, a community about 5,600 people, is about 30 miles west of Kansas City,

“All it took was that first drive in a Pontiac Judge, and Mr. Larson was hooked,” VanDerBrink says in introducing the auction on its website. “He had many cars through the years, but Pontiacs ruled the garage.”

The late Mr. Larson worked for the U.S. Postal Service and after his retirement he “spent many hours collecting Trans Ams, Firebirds,and other Pontiacs.

“He was constantly going to swap meets and looking for cars and accumulated a large assortment of Pontiac parts in the process.”

VanDerBrink remained active and open during the coronavirus pandemic with online-only auctions.

Following the Pontiac Hoard sale, the company has sales of collections scheduled for June 26 at St. Paul, Minnesota; July 24 at Fostoria, Iowa; August 14 at Rutland, Vermont; August 21 at Marne, Iowa; and August 28 at Holland, Minnesota. The sale in Vermont, well away from Midwest farm country, features Indiana motorcycles.