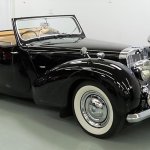 While the Pick of the Day might at first glance look like a warmed-over pre-war British roadster, the 1946 Triumph 1800 was actually an all-original and quite-unique effort to re-establish a moribund brand after the ravages of World War II.

Most notable is the unusual hidden back seat with its own pop-up windshield.

“After WWII, Standard Triumph wanted to expand from agricultural equipment and war materiel into sports cars,” according to the Englewood, Colorado, dealer advertising the car on ClassicCars.com. “They came up with this unique and endearing post-war design that included a lot of imaginative thinking – especially the rear kids’ seats and windshield (Not a rumble seat – the Brits call it a ‘dickey seat.’).”

Still, the Triumph comes across as a most-traditional English sports car, one that was rarely exported to the US and produced only with right-hand drive.  Not until 1953 and the classic TR2 did the brand really hit its stride internationally, and shipped in high numbers to North America as a major part of the British sports car invasion.

The first-year Triumph is powered by a 1,776cc inline-4 engine rated at 65 horsepower and linked with a 3-speed transmission, which is column shifted on the right side of the RHD steering wheel.

This four-owner Triumph 1800 looks to be in gleaming condition, described by the dealer as “partially restored” and “comes complete with all of its original tools & accessories and a box full of history & service records all the way back to when it was new.”

“This English classic car has been in dry Texas & Colorado for decades, has only been repainted (in its original color) once and really looks great inside, outside and underneath,” the seller notes. “While in Denver, it has had engine, transmission & suspension work, brakes and cooling system kept serviced and has been coddled in a private collection for years.

“It even has functioning side trafficators (plus more-noticeable signal lights have been added under the bumper), and the upholstery and top have all been renewed. The carpets, tires & battery have recently been replaced.”

The interior features seating for three abreast, with the tiny child-size jump seats exposed by tilting back the trunk lid and folding forward the separate windshield.  It’s an odd setup that pretty much went away after the Triumph 1800.

The asking price for this unusual and rarely seen British car is $44,500, which according to the Hagerty value guide is near the top of the price range for one in “concours” condition.