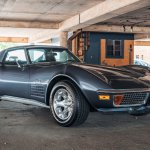 AutoHunter, the online auction platform driven by ClassicCars.com, recently hosted a charity auction with Louisiana-native nonprofit Fostering Community in which it auctioned off a 1971 Chevrolet Corvette Stingray.

After seven days being live on the auction platform and 39 bids later, the Corvette sold for $38,000, which was 90 percent more than the charity’s desired reserve.

Fostering Community is a “non-profit whose mission is to improve the lives of children impacted by foster care through advocacy, resources and support,” said Fontenot.

“I started out photographing kids that were available for adoption and the more I got involved, the more I realized there was a huge need in our area.

“We don’t have counties in Louisiana, we have parishes, but the parish that I live in actually has the highest count of child abuse and neglect cases,” Fontenot continued. “We have a lot of kids in care, over 400, and there were no resources for them.”

“I realized there were a lot of people in the community who wanted to help, but they didn’t have a way to because of all the red tape that’s involved in the state welfare system.

“We founded our nonprofit to be that bridge between the need and then the people who want to help and it’s really just grown from there.”

The long list of services Fostering Community provides includes photographing kids available for adoption to help with recruitment, recruiting foster parents in general and supporting them on their foster car journey, operating its Foster Car Closet that provides essential items to foster families and children and serving as a warm and welcoming visitation site for children and their birth families.

“We also have an initiative called My Community Cares that works to strengthen the community and prevent problems so we’re preventing child abuse and neglect,” said Fontenot.

The 1971 Corvette Stingray that was auctioned off was gifted to Fostering Community by a good friend of Fontenot’s who purchased that car for herself at an estate sale to celebrate her 50th birthday.

“She wasn’t really using it as much and she was like this car doesn’t deserve to be parked, somebody needs to drive it,” added Fontenot. “So instead of selling it, she donated it so that we can keep all the money and it go to our nonprofit.”

It’s powered by a rebuilt 350cid V8 that’s equipped with a chrome finished Edelbrock air cleaner and a high-performance camshaft. Power is sent to the rear via a TH400 3-speed automatic transmission.

“I was kind of nervous the day of when the number wasn’t rising. We had gotten some pretty good bids early on, so I thought maybe it’ll just keep slowly creeping up,” added Fontenot.

With just three hours left in the auction, the bid amounts didn’t slowly creep in, they came in quick and with high price points, ultimately resulting in a final bid of $38,000.

If you’d like to learn more about the Corvette Stingray that was auctioned off or to see more photos visit the vehicle’s AutoHunter listing.