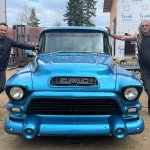 What happens when a restoration shop run by a team of car-crazed Canadians gets its hands on a valley filled with over 400 rusted classics? A little bit of mayhem, a lot-a-bit of laughs and, most importantly, some bad-ass restorations.

This British Columbia shop, Rust Bros Restoration, owned by Mike Hall, is the center of attention of the HISTORY Canada’s docuseries Rust Valley Restorers in which a camera crew follows Hall and his team as they take on their valley of rust buckets one by one, restoring them to their former glory or giving them modern upgrades before selling them off.

Among the sea of rusted-out cars sat a yellow 1957 GMC Sierra in need of some TLC that was restored and modified by Hall’s team in season 3, episode 3. This truck, in all its ghost-flame, suicide-door glory, is being auctioned on AutoHunter, the premier online auction platform driven by ClassicCars.com.

If you live in Canada, you can watch the episode on the HISTORY Canada’s website. For non-Canadians, you can catch the show on Netflix.

In the episode, the ’57 GMC Sierra caught the eye of a teenager and her father as they shopped for an 18th birthday gift – an old school truck that was anything but a Ford.

It’s no surprise this yellow GMC was the winning choice, but it needed some work along with a new paint color, a request from the buyer and his daughter.

As Hall and his lead mechanic and resident jokester Avery Shoaf start work on the truck, they discover the original engine didn’t run as smoothly as they hoped.

The engine, as Shoaf put it, “sounds like a screw in a peanut butter can.” So, Hall with his son and fellow mechanic Connor Hall installed a new Chevy 327/300 horsepower engine.

As work on the truck continued, the buyer asked Hall and his team for a unique modification – to replace the original cab doors with suicide doors.

“It is a cool feature. You just don’t expect to see it and it gives the truck a really smooth look,” Mike Hall told the Journal in a recent interview.

During the restoration, the truck also got a custom interior and console, the transmission was swapped to an automatic, and the truck was repainted in Snapper Blue paint with ghost flames on the front clip.

To make the suicide doors safer, Hall’s team added wiring in the truck that won’t allow the doors to open while it’s being driven.

Unfortunately, shortly after the build was complete, the buyer, his daughter and the rest of their family were seriously impacted by Covid and were unable to purchase the truck.

Quick to jump in and save the day was Tyson Hepburn, executive producer of the show, who purchased the truck. Hepburn is excited to auction the truck on AutoHunter so Hall’s team can get working on his personal dream car, a 1977 Ford Bronco.

When asked why Hepburn and Hall choose AutoHunter as their online auction platform to list the truck, Hepburn said, “ClassicCars.com has really gotten the market cornered. So, we just figured what place to try an online auction.”

While the GMC’s episode isn’t available to view outside of Canada, you can watch Hall and his team restore a handful of other rusted classics on Rust Valley Restorations over on Netflix or on STACKTV.

The GMC Sierra’s auction runs June 4-11. Visit the truck’s AutoHunter listing for more information about the auction and for a gallery of photos.