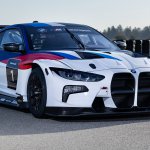 Or… for $530,000, BMW Motorsport will sell you a turn-key BMW M4 GT3 customer race car with as much as 590 horsepower and eligible for IMSA and SRO GT series. Cough up another $55,000 and you also get the Competition Package with extra headlights, extra wheels, backlit door numbers, rearview camera and radar, special equipment that monitors tire pressure, spring and brake-pedal travel, and “one day of training on the BMW M Motorsport M4 GT3 simulator.”

The turn-key customer race car carries the P58 M TwinPower Turbo engine based on the S58 in the Comp Coupe but with a dry-sump lubrication and other motorsports alterations. The car also has a revised 8-speed gearbox.

According to Ulrich Schulz, head of drivetrain design for BMW Motorsport, the P58 is “the most powerful straight-six engine BMW has installed in a racing car since the days of the BMW M1 Group 5.”

The air-conditioned cockpit features the latest FIA BMW M safety seat, as well as adjustable steering wheel and pedals. Speaking of the steering wheel, BMW notes that it was created in a technology transfer between real and virtual racing, developed by BMW Motorsport and sim hardware producer Fanatec and can be used both in the car and on a simulator.

The turn-key customer race car is scheduled to make its debut June 26 in the 24-hour race at the Nürburgring in Germany.

The post BMW will sell you a turn-key M4 GT3 race car for $530,000 appeared first on ClassicCars.com Journal.