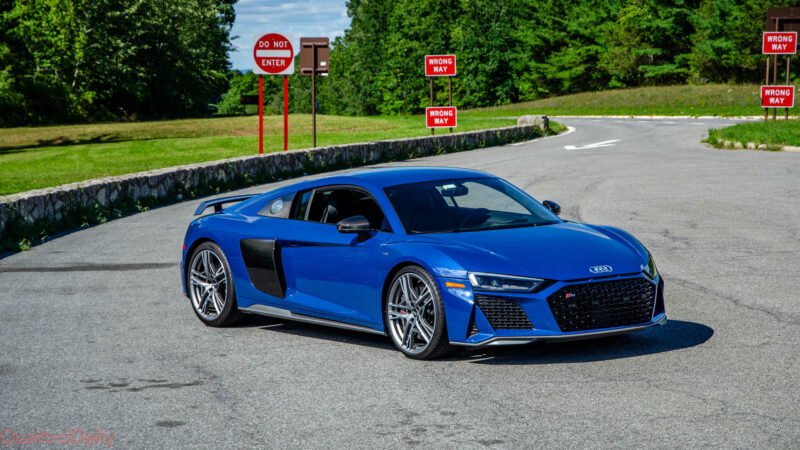 As much as we all love it, the Audi R8’s time is coming to an end. Emissions restrictions, Audi’s push for more EVs, and unfortunately slow sales all spell the end for the R8. It’s a sad ending, because the R8 is such an incredible machine, but we understand it. In this new video from Joe Achilles, though, he says goodbye to the V10-powered supercar.

To give the Audi R8 V10 Performance a proper goodbye, Achilles took it to Silverstone race track to give it a good thrashing. After all, as good as the R8 is as a daily driver, capable of doing the everyday mundane stuff every bit as well as a Golf, it’s more at home on a track, where it can stretch its legs.

On the road, the Audi R8 V10 Performance is a fast, comfortable, and fun to drive supercar. But you always get the sense that it’s straining at the leash, that it wants to go faster and faster but can’t, due to pesky things like laws. When you put your foot down on the road, you can only use its power for a second or two before you’re either dangerously past the speed limit or about to rear end the car in front of you. On track, though, the R8 comes alive, where it can really open up its 5.2 liter naturally-aspirated V10.

Last time I drove an R8, I wished I could have taken it to the track. It’s just too restricted on the road and I felt as if it just wanted to run forever. Though, I did chase down a McLaren 570S with it, so I guess that counts for something.

We’re going to miss the Audi R8 when it’s gone. It may come back as an electric supercar but we’re still going to miss this car’s naturally-aspirated V10, incredible soundtrack, and visceral performance. Achilles is right, it’s the end of an era.

The post VIDEO: Joe Achilles Says Goodbye to the Audi R8 V10 — End of an Era appeared first on QuattroDaily.