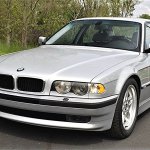 In the luxury car marketplace, many models have historically been targeted specifically to professional business executives.  A 2001 commercial for BMW’s flagship 7-Series takes viewers through a day’s activities of white-collar life but concludes with a twist – all of those tasks were carried out as part of an extended, day-long test-drive.

The Pick of the Day is a 2001 BMW 740iL, an executive cruiser listed on ClassicCars.com by a private seller in Elkhart, Indiana.

While the listing doesn’t reveal who owned the car 20 years ago, it likely was someone in a high-rise office building working his or her way up the corporate ladder.  But the commute must have been short – the odometer reads only 76,000 miles.

“After driving this very well-maintained 2001 BMW 740iL, it is easy to understand why the 7-Series was the flagship of the BMW lineup,” the listing states.  “This BMW runs and drives just as it should and is ready for a cross-country trip with no excuses.”

Finished in Titan Silver Metallic, the sedan rides on a chassis called the E38 and carries an “L” suffix in its model name, indicating that it has an extended wheelbase with a few extra inches of legroom for rear passengers, making it BMW’s largest car at the time.

Since the flagship 7-Series’ introduction in 1977, BMW has used this model as a showcase for its newest technology, later trickling down to lower models in succession.  Some of the innovations for this sixth-generation 740iL include a navigation system, a built-in garage door opener, and a host of comfort and convenience amenities.

Power for all E38 7-Series models comes from a 4.4-liter V8 that delivers 282 horsepower and sends power to the rear wheels through a five-speed automatic transmission.

According to production data on the BMW Sales & Production Databook, this car was one of 13,389 sold in the United States for the 2001 model year.  There might not be many remaining with fewer than 100,000 miles on them today.

“If you are looking for a luxurious ride, you have found the car,” the seller concludes.

The asking price is $9,995, which seems like a bargain considering it cost $66,900 when new.  It could be the perfect neo-classic car for celebrating your promotion to regional manager.