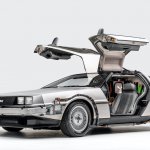 The 1981 DeLorean DMC-12 time machine from “Back the Future” is the 29th car to join the National Historic Vehicle Register. Run by the Hagerty Drivers Foundation in collaboration with the United States Department of the Interior, the aim of the register is to “recognize and document” historically significant vehicles, and the DeLorean-based time machine certainly has our approval.

Things went downhill from there. Production problems at DeLorean’s Northern Ireland factory, along with accusations of shady business practices and charges of drug trafficking resulting from an FBI sting operation against DeLorean (he was later acquitted) led to the company’s disintegration. About 8,500 cars were built, according to the Hagerty Drivers Foundation.

While the first “Back to the Future” movie arrived too late to save the DeLorean Motor Company, it immortalized the DMC-12 as the plutonium-powered time machine built by “Doc” Brown (Christopher Lloyd) and piloted by Marty McFly (Michael J. Fox). Different versions were used in two sequels.

Screenwriters Bob Gale and Robert Zemeckis originally thought of using a refrigerator as the time machine. Once they switched to a car, the DMC-12 was the obvious choice because, as Brown tells McFly “if you’re gonna build a time machine into a car, why not do it with some style?”

National Historic Vehicle Register status applies specifically to the original “hero car” from the first movie. After filming, it was placed on display at Universal Studios Hollywood, where it fell into disrepair. The car was restored in 2012 in an effort spearheaded by Gale, and went on permanent display at the Petersen Automotive Museum in Los Angeles in 2016. The DeLorean joins a list of iconic cars on the register, including the Buick Y-Job concept and the Shelby Cobra Daytona Coupe.

The post “Back to the Future” DeLorean time machine added to National Historic Vehicle Register appeared first on ClassicCars.com Journal.