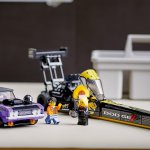 “In 2021, we are extremely excited to reteam with Dodge and expand the Speed Champions 8W Vehicle Collection even further by including new vehicle types and building experiences, for the first time, that appeal to vehicle fans of all ages,” Lego design leader Christopher Stamp said in the new release announcing the collaboration.

“Owning, or aspiring to own, a Dodge muscle car is as much about the lifestyle of joining the Brotherhood of Muscle as it is about the vehicle purchase,” added Tim Kuniskis, Dodge brand chief executive officer.

“As a result, our brand enthusiasts are passionate about all things Dodge, including the latest cool collectibles. So, following the success of the Dodge 2018 Lego Speed Champion building set, fans will now be able to build and show off not only the first ever 8-inch-wide (8W) muscle car, but also the first ever Plum Crazy 1970 Dodge Challenger T/A, along with an incredibly detailed 13 ½-long Top Fuel dragster.”

The 1970 Challenger included in the set is Lego’s first purple vehicle in its Speed Champion series.

Also included in the 627-piece set is one female Top Fuel dragster driver dressed in a Dodge race suit and a male Challenger driver in a Dodge-branded casual outfit.

Each vehicle is built on a wide chassis, allowing for more room for decorative stickers.

The set are available for purchase beginning June 1 on LEGO’s website.