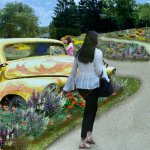 Vintage vehicles will be arrayed as eye-catching sculptures in what has been an idle section of Wilson Park in Milwaukee, the Milwaukee Journal Sentinel’s website reports in a story headlined, “Classic cars coming out of the ground? Eye-catching garden at Wilson Park gets green light.”

The “Historic Highway 41 Garden project” was launched by the South 27th Street business association and is designed to celebrate the history of the highway as it approaches its centennial. The highway, which runs from Copper Harbor, Michigan, to Miami, Florida, became known in the Milwaukee area as the site for classic car shows, the paper reports.

The cars, which will be painted by local artists, will be the feature of native flower beds. The plan includes benches and picnic tables.

Construction is to begin in the spring of 2022.

I don’t know about you, but I find it amusing that Carlisle Events proclaims that its annual Chrysler Nationals is going “Old Skool” from July 9-11, and yet the photo that arrives with the news release show a late-model Dodge burning rubber.

“In the minds of many, fireworks on the 4th of July are the highlight of month, but for car lovers, the red, white and boom take a back seat to Mo-cars and Mo-power via the biggest and best all-Mopar event of its type, the Carlisle Chrysler Nationals,” the news release reports.

“As displays go in 2021, themes include a showcase of 1971 vehicles – all kinds of them.  In addition, the ‘Dirty ‘Birds’ get preferential treatment.  What is a Dirty ‘Bird?  Well, car lovers know what a Barn Find is, but as dirty birds go, this display will highlight derelict Superbirds… ones that aren’t shiny!”

Other special displays are those for the Demon, a tribute to the late Mr. Norm, and another for Old Skool paint. To qualify for the paint display, a car’s paint has to be at least 40 years old, or at least a more recent but retro style application.

The Carlisle Ford Nationals are scheduled for June 4-6 and the weekend includes a Ford Parade and Street Party in downtown Carlisle, Pennsylvania, at 7 p.m. on June 5.

“Kustom” cars will be among the featured classes June 8-10 at the fifth annual London Concours. The event notes that customs trace to “modified American cars evoking the spirit of the Southern California scene from the 1940s to the 1960s,” but that cars on the show field will include vehicles from both sides of the Atlantic.

Among the vehicles to be displayed is a 1953 Austin A40 Somerset, still owned by Scarlett Devey, who did the conversion when she was 19 years old. Over the course of three years, she lowered the roof 4 inches in front and 6 inches at the rear, and lowered the car’s ride height as well. She also converted the car from a 4- to a 2-door, and painted it in a 1940s Plymouth color called Sumac Red.

The class is being curated by the Vintage Hot Rod Association and sponsored by The Ace Cafe London.

Five Formula 1 racing teams have committed to participate in the Goodwood Festival of Speed scheduled for July 8-11. McLaren, Mercedes-AMG Petronas, Red Bull Racing Honda, Scuderia Ferrari Mission Winnow and Williams Racing all are on board for the event, which features cars racing up the Goodwood hill roadway.

The teams also will participate in the F1 Pit Lane which will feature past and present Grand Prix racing cars.

After missing 2020 because of the coronavirus pandemic, the Hillsborough Concours d’Elegance, which was founded in 1956 and had been held annually ever since, returns for 2021 and has announced its date — July 18 at the Crystal Springs Golf Course in Burlingame, California, with a Bay Area road tour the previous day. Featured marques this year will be BMW and Ford.

The 75th anniversary Revival AAA Glidden Tour is scheduled for September 12-17 and will include Adirondacks Mountain roads, a cruise on Lake George, visits to private car collections, the National Museum of Dance, the National Museums of Horse Racing and Jockeys, Vermont covered bridges, historic family homes and more.

The event is open to vehicle manufactured before 1943 in original as-built condition (with the exception of modifications for safety). The entry deadline is June 30 and the tour is limited to 250 vehicles.

The event had been scheduled to debut on an abbreviated basis in conjunction with the 2020 Finger Lakes Wine Festival, but will be a stand-alone vintage racing event in 2021 and thus the addition of HSR Run Groups 2, 3, 5, 7, 8, 9 and 10 to the schedule, as well as a test day July 8. In addition, eligibility for Run Groups 9 and 10 has been expanded to include more vehicles.

January 2-14 have been set for the dates for the 44th edition of the Dakar rally, which again will be held in Saudi Arabia, starting in Ha’il and finishing in Jeddah. Compared to the 2021 event in the Saudi desert, the 2022 competition will head southeasternly to present a “sandier tone” to the challenge, including the Empty Quarter with its “dunes galore,” organizers said.

The 2022 event also will include the T1-E category for electric-powered prototypes as Dakar begins its drive to eliminate combustion engines from eligibility by 2030.

The race also will also include the growingly popular vintage category, Dakar Classic, for 1980s and ‘90s vehicles.

While the coronavirus pandemic has forced the cancellation of the 2021 Forest Grove Concours d’Elegance in Oregon for 2021, organizers of the event encourage car owners to take part in the Main Street Cars and Coffee and Driving Tour scheduled for July 18. The event begins at 8 a.m. in Forest Grove and includes an optional driving tour to the Brothers Collection Museum and its 350-vehicle display in Salem. The tour departs the car show at 10:30 a.m.