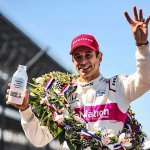 So far, 2021 has been a good year for what might be termed vintage athletes. Tom Brady, age 43, and the Tampa Bay Buccaneers won the Super Bowl; Phil Mickelson, 50, won the PGA golf championship, and during the Memorial Day weekend, 46-year-old Helio Castroneves won the Indianapolis 500.

While he wasn’t the oldest driver to win the world’s most famous auto race, Castroneves’ victory was his fourth in the 500 and no one has won the race more often, as he joins A.J. Foyt, Al Unser Sr. and Rick Mears as the only four-time winners in the history of a race that stretches back to 1911.

Making the Castroneves victory even more impressive was the fact that this was the fastest 500 in history, the winner averaging more than 190 mph, and he wasn’t driving for Roger Penske, as he did in his previous victories, but for the Meyer Shank Racing. The victory not only was the team’s first at Indy, but its first in the IndyCar Series.