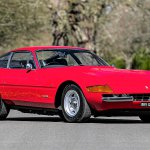 Thirty exquisite Ferraris and more than 100 pieces of Ferrari automobilia will be auctioned June 5 as part of National Ferrari Owners Day in the UK.  Hosted by the Ferrari Owners’ Club of Great Britain, the Silverstone Auctions sale will take place at Hangar One of the Sywell Aerodrome.

Among the special Ferraris is a 1972 365 GTB/4 Daytona formerly owned by rock star Elton John.  One of just 158 Daytona supplied to the UK, the 365 is finished in its original colors of Rosso over Nero (red over black), with a numbers-matching drivetrain and accompanied by its Classiche Red Book, original purchase order and a comprehensive set of invoices.

“We are honored to be part of this special day which celebrates Ferrari,” Gary Dunne, sales controller of Silverstone Auctions, said in an auction news release. “Our dedicated marque sale will see some truly special and unique opportunities and of course we are delighted that bidders will be able to join us in the room for this auction.”