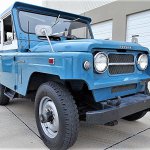 If the lofty prices have you down for such popular off-roaders as Ford Broncos and Toyota Land Cruisers, then here’s a sharp little Japanese SUV that’s rare enough to stand out yet still be affordable: the Nissan Patrol.

The Pick of the Day is a 1971 Nissan Patrol 4X4 that looks to be in very nice condition and runs well, according to the Dallas dealer advertising the SUV on ClassicCars.com.

“This original 1970 Nissan Patrol 4×4 is solid and attractive, a vehicle that does not fail to get noticed and asked about at every stop,” according to the seller.

The Nissan has many of the same attributes as the Bronco or the Land Cruiser FJ40, powered by a 4.0-liter inline-6 and 3-speed manual transmission, with part-time 4-wheel drive and a 2-speed transfer case. These are competent off-road runners and solid urban warriors.

The seller contends that the Nissan is actually a better SUV than its Toyota equivalent.

“Ride and drive is better than similarly aged FJ40s by far, largely due to Datsun/Nissan’s better build quality of the era coupled with how well it has been maintained over the years,” the seller says.

The Nissan appears in the photos to be a pampered pet in great shape.

“Not only was the Patrol obviously well-maintained and never abused, but the restoration of aged chassis elements and the paint job is quality,” the seller notes.

Nissan Patrols are commonly used in Asia, Australia and New Zealand, where they have a reputation for hardy capability, but they are relatively rare in the US because only a few thousand left-hand-drive versions were imported here.

The asking price for this good-looking example is $27,000, which definitely would undercut a Bronco or FJ40 in comparable condition. To view this vehicle on ClassicCars.com, see Pick of the Day

The post Pick of the Day: 1971 Nissan Patrol 4X4, an affordable SUV rarely seen in the US appeared first on ClassicCars.com Journal.